With the Democratic takeover of the executive and legislative branches a few days away, Big Tech has swung into action in a big way to suppress conservative speech. The treatment of President Trump is of course the leading indicator.

Here is a compilation of the developing stories as of this morning, and a blast from the past for mood music:

I have never heard this before! I lu vit. Oh wait, I've heard the original. This is goood
Top

Now I can't open the Itunes store. They won't let me on Itunes!
Top

You don't say! Looks like the Big Tech Cancel Culture Oligarchs are going like gangbusters to enact their purge priority progression from platforms to users

Nothing nefarious about it though. There's no plan to purge people physically... Provided they wise up, behave properly & never ever question their authority
There are none so asleep & oblivious to the real world as those who are & would be Woken.

Even Europe is having a "raised eyebrow" over the "Twitter" ban of Trump, saying "America is a Banner For Free Speach" Well Not Any More, it 's Just for the ones that hate the best.
KARMA RULES
Top

In the 1970s, my constitutional law professor, Gerald Gunther, was invited by the West German government to visit that country and to lecture on the American Constitution. Gunther and his family had fled Germany in the 1930s.

When he returned home to California, Gunther commended the Germans as hosts and for what they were accomplishing as a society. However, he added that they still didn’t quite understand the importance of free speech.

These days, though, they understand it better than corporate America does — admittedly a low bar. CNBC reports:

“The right to freedom of opinion is of fundamental importance,” Steffen Seibert, Merkel’s chief spokesman, told reporters in Berlin on Monday, according to Reuters.

“Given that, the chancellor considers it problematic that the president’s accounts have been permanently suspended.”

Seibert said that, while Twitter was right to flag Trump’s inaccurate tweets about the election, banning his account altogether was a step too far.

Nor is Merkel the only European standing up for America’s freedoms. Jazz Shaw notes that both UK Health Secretary Matt Hancock and EU Commissioner for Internal Market Thierry Breton made similar comments.

Nor is it only the U.S. President who has been banned from various social media outlets. Scott has covered the silencing of other conservative and/or populist voices in his “Shapes Of Things” posts.

I hope that one of two things will happen. Either the barons of social media will relent — of their own accord or due to pressure — or else conservatives, including Trumpian ones, will find other ways to disseminate their opinions widely on something like an equal basis with other viewpoints.

But if neither happens, a third thing might — a genuine insurrection, as opposed to the less drastic event that occurred at the Capitol last week.
There are none so asleep & oblivious to the real world as those who are & would be Woken.

WHAT? Five people dead and many threatened with death because your big fat hero can't keep his childish mouth shut. Bout time they muzzled the moron!
“For evil to flourish, it only requires good men to do nothing.” Simon Wiesenthal
Top

What a Hellish Mess, we have all the Tech companies wanting to rule the World, the Democraps turning Nazi, and the China money shop helping the Take Over of The Us. Nancy is ready to do the big nazi, Purge firing squad for Republicans and Jews again, I don't think she likes them either, Nancys new boses, certainly don't, Iran is back making nukes, I'm placing a Bet, here and now, the Democraps, will get a war going with-in the next 6 months! The Democrats are in love with their own violence they have overlooked the fact their hired terrorists, are still burning Portland and Seattle on a nightly bases. Can any body name any thing the Dems are not in control of?
KARMA RULES
Top

Well, they do have a lot of people mind-controlled. But not everyone. Yet, for the people whose minds they don't control, they have ways of making them see the light...

Said light beaming from the totalitarian train that's gonna run them over
There are none so asleep & oblivious to the real world as those who are & would be Woken.

A yes, lies, blackmail, fear- when given an ultimatum, do as I say or parish, we are seeing quite a bit of that now.
Most desire to survive, in hopes the Jihad will be over(sometime). I liken it to what an Alien invasion is like , because they and their minnions do not posses any of the finer human qualities, that humans tend to like to strive for. Compassion, integrity, etc. Just a bunch of souless enities, brought up from the depths of the Earth , where they reside. The lession is ours, what ever that may be?
KARMA RULES
Top

Dems will never put a lid on Teck, they got too much money and help from them.

German Chancellor Angela Merkel called Twitter’s ban on Trump “problematic,” and said that freedom of opinion is an essential right of “elementary significance,” her spokesperson, Steffen Siebert, said on Jan 11.

“This fundamental right can be intervened in, but according to the law and within the framework defined by legislators—not according to a decision by the management of social media platforms,” Siebert said.

Members of the French government agreed.

Clement Beaune, the junior minister for European Union affairs, said he was “shocked” a private company made this kind of decision.

“This should be decided by citizens, not by a CEO,” he told Bloomberg TV on Monday. “There needs to be public regulation of big online platforms.”

Excerpted from Joy Pullmann at The Federalist:

You had better believe there are discussions among credit card companies, banks, and other financial institutions about punishing organizations they view as opposing leftist political views. In December, for example, a so-far unnamed credit card processing company refused to process donations to the American Family Association because it is socially conservative. Previously, big banks refused to bank for legal gun manufacturers after pressure from leftist activists.

This is the kind of power the left holds over all the institutions that make life possible for Americans, and they have already revealed they are not afraid to flex that power against the left's chosen enemies. All of this is merely the next step in years of campaigns to use economic pressure to control public policy...

...We all saw Big Tech and Big Media collude to hide information damaging to the left and amplify information and narratives damaging to the right. Corporations are now wielding supra-governmental power untethered by even the pretense of constitutional legitimacy, and our government seems entirely powerless to stop them.

This all moves us closer to a nongovernmental social credit system like that employed by Communist China, which economically and socially punishes people for "wrongthink." It appears that global oligarchs have decided to not only collude with China's totalitarian control over its society, but to export that social control to formerly free nations such as the United States...

...This week's escalation of totalitarian speech controls and witch hunts -- Are you now or have you ever been a supporter of Donald Trump? -- is terrifying, and not just because of the lack of defenses against leftists' demonstrated control of information and funding. If they can do this to the president of the United States, who can't these corporations do it to?...

...If they choose to lie to us, to lie about one political party, to lie about events they use to impose draconian speech and social controls, and to ban us from ever sharing information that proves or even simply suggests they lied or aren't telling the whole story, how would we ever know it?

However long it takes, whatever ethical methods it takes, their power must be broken. You and I can start by not believing a word they say. Next, we need to start securing and expanding our ability to find and proclaim the truth, for as long and as loudly as we can.
There are none so asleep & oblivious to the real world as those who are & would be Woken. 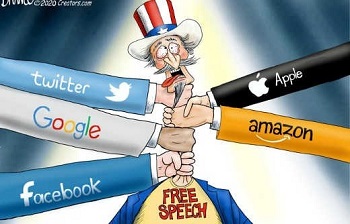 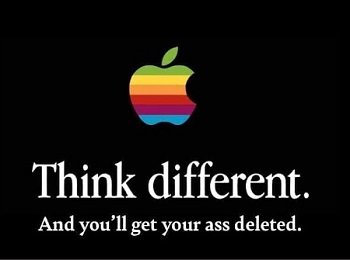 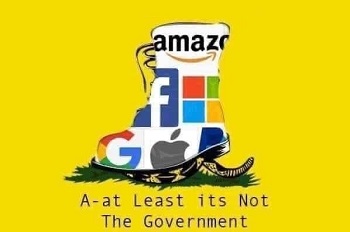 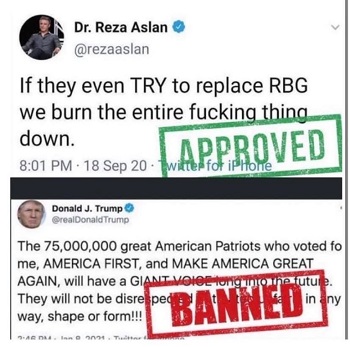 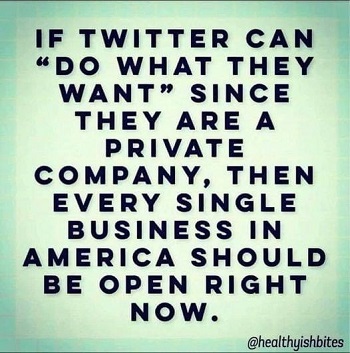 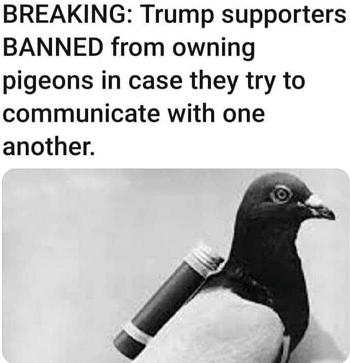 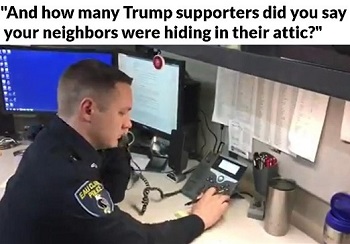 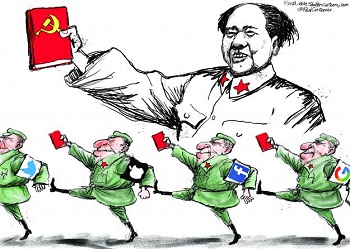 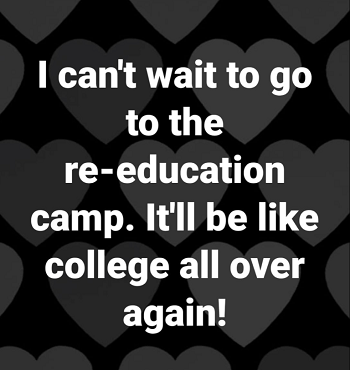 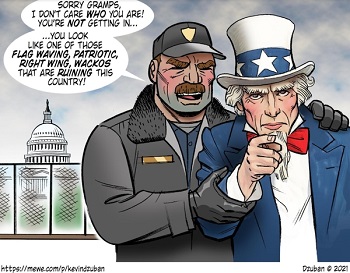 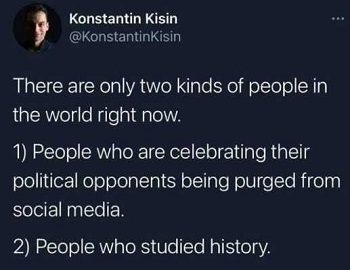 You forgot the part where Trump tried to overthrow the government of the United States of America using social media to promote such a treasonous act. A little beyond free speech wouldn't you say?
“For evil to flourish, it only requires good men to do nothing.” Simon Wiesenthal
Top

So Being Patriotic Is Dangerous Now?!

FB Permanently Bans Retailer From Advertising Pro-America Products
The company told business owner LeeAnn Miller her products violate its community standards. Facebook would not say which ones.
--
They won't admit it but Facebook has an unwritten "Hate America First" policy - And besides, if you can't see how a business name like "PatrioticMe" clearly incites domestic terrorism, there's something dangerously wrong with you.
There are none so asleep & oblivious to the real world as those who are & would be Woken.

"Inside every progressive is a totalitarian screaming to get out." - David Horowitz
Top
Post Reply
15 posts • Page 1 of 1