A leaked memo from left-wing financier George Soros’s Open Society Foundations argues that Europe’s refugee crisis should be accepted as a “new normal,” and that the refugee crisis means “new opportunities” for Soros’ organization to influence immigration policies on a global scale.

If you read this, it will reveal what is being done to create the chaos , we are experiencing into A big money making, for the PTB any way, plan. The "refuges" are being used as a "battering ram" and appear to be willing to do their "duty" while the ignorant just want to give them A hug.

One particular leaked memo, profiled earlier by the Daily Caller, argues that Europe’s refugee crisis should be accepted as a “new normal,” and that the refugee crisis means “new opportunities” for Soros’ organization to influence immigration policies on a global scale. OSF program officer Anna Crowley and program specialist Katin Rosin co-authored the May 12 memo, titled “Migration Governance and Enforcement Portfolio Review.”

As the authors write in the introduction, one of the purposes of the review “consider the effectiveness of the approaches we have used to achieve change at the international level.” A section of the review titled “Our Work” describes how America’s least transparent think tank has worked with “leaders in the field” to “shape migration policymaking and influence regional and global processes affecting the way migration is governed and enforced.”

More Leaked Memos And this one is truly disgusting!

Members of the advisory board include Soros family members, left-wing activists, Ivy League professors and columnists for The Washington Post and Foreign Policy magazine.  The memo, entitled “State of U.S. Programs,” is part of a 75-page file containing internal documents from a Feb 11 and 12 board meeting.

“Consistent with our recent practice, this memo provides an overview of the state of USP and its operations with a focus on items that are not otherwise covered in the upcoming board discussions,” the memo reads.

You are aware that this mass migration, has but really one main purpose? Cheap labor. Hillary , Barry, and Soros are aiming for the return of $2.00 a day for the best and

the brightest. Just like their good friends the Castro's are doing in Cuba.

From JT Harris: "We hear about the Koch brothers all the time... Look what happens to you when you try to report on Lord Palpatine George Soros!"

If you keep looking, you can pretty much find out what is in the "Soros Leaks" , so keep looking, foreign sites are not quite so shy.

Even this site can't disclose all, with out the threat of shut down.

Where Is Media Coverage Of George Soros Meddling In U.S. Internal Affairs?

The mainstream media once again have revealed their "selective" reporting of the news by not covering political manipulations in the United States funded by leftist George Soros. FULL STORY
There are none so asleep & oblivious to the real world as those who are & would be Woken.

An Obama administration appointee manages a fund that liberal billionaire George Soros uses to bankroll election-related activities like increasing the number of “voters of color” and “improving odds” of electing preferred candidates, actions that are discussed in recently released hacked documents.


Direct Link: https://youtu.be/mN0qJvN33Z4
There are none so asleep & oblivious to the real world as those who are & would be Woken. 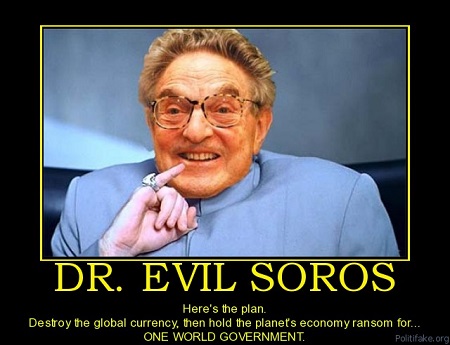 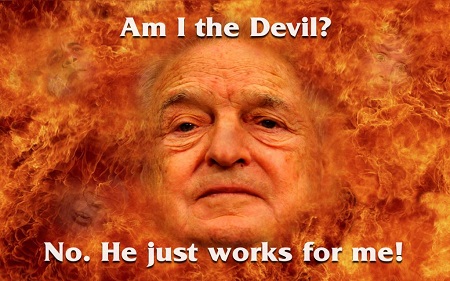 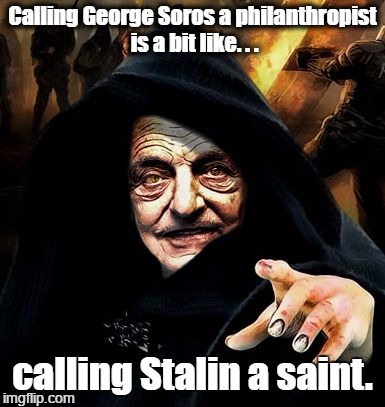 George Soros to invest $500 million in help for refugees


Billionaire investor George Soros pledged on Tuesday to invest up to $500 million in programs and companies benefiting migrants and refugees fleeing life-threatening situations.

Announced against the backdrop of an ongoing United Nations (U.N.) summit in New York, Soros explained that he wished to harness the power of the private sector for public good.

"We will invest in startups, established companies, social impact initiatives, and businesses started by migrants and refugees. These investments are intended to be successful. But our primary focus is to create products and services that truly benefit migrants and host communities," the 86-year-old said in an official statement.

"I hope my commitment will inspire other investors to pursue the same mission."

On Monday, the U.N. opened its first summit addressing the current refugee and migrant crisis. The U.N. and Unicef calculate that a record 65 million people were forcibly displaced from their homes in 2015, with more than half from just three countries: Syria, Afghanistan and Somalia, Reuters reported.

How George SOROS May Help Hillary STEAL The ELECTION

Direct Link: https://youtu.be/F2gHNI7eHf0
There are none so asleep & oblivious to the real world as those who are & would be Woken.

As I say "Old Nazies Never Die" ! But, the people can work around them and achieve some positive things for themselves. He and his Minions have faces and names, they no longer enjoy the cover of "Dark Anonymity"

According to Politico, Soros and other key members of the so-called “Democracy Alliance” met in Washington, DC at the Mandarin Oriental hotel on Sunday for the first day of the group’s three-day investment conference.

The Democracy Alliance has funneled upwards of $500 million toward liberal activist groups and candidates since Soros co-founded the group in 2005.

But the issues the DA and DNC traditionally use to mobilize liberal voters — a la climate change — failed to pull white, working class support away from Trump and the GOP, which as one Democrat operative put, should “[call] into question… the DA itself.”

Therefore, at this year’s meeting, Soros and other liberal leaders — including Nancy Pelosi, Elizabeth Warren and Keith Ellison — will discuss opposing Trump’s plan for his first 100 days in office, a plan the DA called “a terrifying assault on President Obama’s achievements, and our progressive vision for an equitable and just nation.”

Very similar to the post above , this one has some "names"

Soros bands with donors to resist Trump, 'take back power'

George Soros and other rich liberals who spent tens of millions of dollars trying to elect Hillary Clinton are gathering in Washington for a three-day, closed door meeting to retool the big-money left to fight back against Donald Trump.

The conference, which kicked off Sunday night at Washington’s pricey Mandarin Oriental hotel, is sponsored by the influential Democracy Alliance donor club, and will include appearances by leaders of most leading unions and liberal groups, as well as darlings of the left such as House Democratic leader Nancy Pelosi, Sen. Elizabeth Warren and Congressional Progressive Caucus co-chairman Keith Ellison, according to an agenda and other documents obtained by POLITICO.

Center for Security Policy President Frank Gaffney was a guest on Breitbart News Daily Wednesday morning, where SiriusXM host Alex Marlow asked him to run through the arguments for and against Rep. Keith Ellison becoming chair of the Democratic National Committee.

“I’m not really equipped to make the case for Keith Ellison,” Gaffney admitted, but he went on to guess that “the appeal of Keith Ellison is that he is a young, very aggressive hard leftist – actually my friend Trevor Loudon in his film The Enemies Within has pointed out, a guy with actual communist ties; that’s how hard Left.”

“But he’s also a Muslim who has been hanging with, embracing, supporting, and otherwise carrying on with the Muslim Brotherhood in America,” Gaffney continues. “And that would apparently be something that qualifies him to be a leader of the Democratic Party these days. You see a lot of it in the last campaign. I can’t make the case that that’s good for Democrats. I can’t make the case that it’s good for America. But hey, if the Democrats want to take the poster child of what I think of as the ‘Red-Green Axis’ and make him the titular leader of their party, bring it on.”

With not much problem, you can find these ads, easily.

COLUMBIA, Mo. – After a student organized a protest last Friday evening at the University of Missouri campus, an individual named Tyler solicited on Craigslist, a popular online classified site, for paid protesters.

The protest was planned for Monday evening in front of the Columbia City Hall, where protesters were to be compensated $15/hour. Protesters were told to “dress to impress” and “expect to be there for at least 10 hours.”