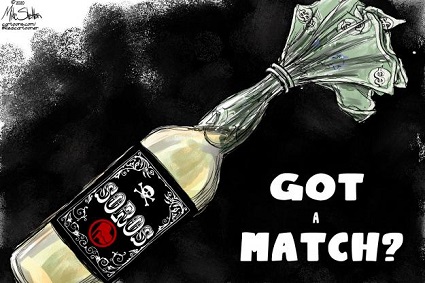 The organization plans on investigating $150 million alone into five-year grants for organizations aimed at achieving equal statistical outcomes between demographic groups in economics and criminal justice. The other $70 million is said to be going toward “more immediate efforts to advance racial justice.” Groups expected to receive funds include Black Voters Matter and Repairers of the Breach.

“It is inspiring and powerful to experience this transformational moment in the racial justice movement,” said Open Society Foundations president Patrick Gaspard. “We are honored to be able to carry on the vital work of fighting for rights, dignity, and equity for oppressed people the world over started by our founder and chair, George Soros.”

The "Soros Pimpette" Should be in deep do-do, But as she is afterall , Democrat, and they are all slime coated , Nothing Sticks, will probably end up with the "Nobel Peace Prize"

A News 4 investigation has found that Circuit Attorney Kim Gardner has been flying all around the country and the globe with organizations who want to reform the criminal justice system.

Now, an explosive new report says Kim Gardner has taken many lavish trips on the dime of Soros-backed organizations, and may have broken the law by not reporting them.

St. Louis law requires all public officials to report their travel, and who paid for it. Missouri state law also may apply. KMOV News 4 reports that Gardner’s travel has been “prolific and problematic,” saying that she often can’t be reached to conduct official business while traveling.

She made headlines by charging Mark and Patricia McCloskey for defending their property, but St. Louis Circuit Attorney Kimberly Gardner might have legal problems of her own. Over the last two days, multiple allegations of ethics and campaign violations have erupted against Gardner, and not exactly from defenders of the McCloskeys. The CBS affiliate in St. Louis details a number of trips Gardner took, paid for in part by progressive political supporters, that she never disclosed. KMOV reports that Gardner’s junkets were “prolific and problematic,” at times interfering with her public duties.

Gardner provided them with more ammunition by allegedly violating campaign finance regulations. That accusation comes from Democrats supporting her primary rival, Mary Pat Carl. And it’s not the first time Gardner has done so — in fact, she’s on probation for a previous violation:

George Soros :The Creator of "The ObamaBot"


Why Aren't We Allowed To Talk About George Soros's Plan To Remake America?

Since 2015, George Soros has pumped tens of millions of dollars into local races in Texas, Colorado, California, Oregon, Washington, Florida, and New York, as well as swing states.

Since 2015, George Soros has been executing a plan to reshape the country through local district attorney elections by pumping unprecedented amounts of money into races that typically only see candidates spend in the low five figures.

Here’s why he has an interest in these local races. Soros is exploiting the reality that all politics are local in some way. To transform America, you have to transform the way towns and cities operate.

A recent exchange on Fox News involving former House Speaker Newt Gingrich, Fox News host Harris Faulkner, Democrat commentator Marie Harf, and Fox commentator Melissa A. Francis made the hair on my arms stand up because I realized how many people were either unaware of what Soros is doing or have been silenced by the idea that it’s somehow antisemitic to criticize Soros’s political activity.
Criticizing People’s Political Actions Isn’t Racist

Before we dive into what Soros has done, we need to put the antisemitism argument to bed. Criticizing how an enormously wealthy individual uses his money to change a nation is not in any way related to criticism of that person’s ethnicity or religious beliefs. It’s simply an exercise of civic engagement, which is essential for any self-governing people.

The left’s assumption that questioning someone’s political spending is equivalent to questioning his dignity as a person is itself a deeply bigoted assumption, designed solely to silence dissent and shut down debate.

In the segment I referred to earlier, Gingrich brought up the indisputable fact that Soros has been spending what can only be described as unprecedented amounts of money on local races in recent years, with a goal of flipping DA races to far-left “progressive” candidates who will implement soft-on-crime policies that inevitably result in skyrocketing crime rates and violent criminals walking free.

In response, Harf and Francis objected: “George Soros doesn’t need to be a part of this conversation.” Harf went so far as to deny that Soros is buying these races, and Faulkner did not step in to correct her. The segment ends in awkward silence as a disappointed Gingrich remarks that it’s apparently “verboten” to speak about Soros on Fox News now.

Buying Prosecutors Who Are Soft on Crime

Since 2015, Soros has pumped tens of millions of dollars into local races in Texas, Colorado, California, Oregon, Washington, Florida, and New York, as well as swing states such as Pennsylvania, Virginia, and Arizona. In 2016, Soros spent $2,000,000 on a single sheriff race in Maricopa County, Arizona, helping the leftist candidate, Paul Penzone, win.

In Philadelphia, Soros spent an insane $1,700,000 to elect Larry Krasner DA. Soros has also given millions of dollars in grants to candidates in other states. These enormous contributions have a correspondingly enormous impact.

Although his efforts haven’t been universally successful, the vast majority of Soros-backed candidates have won with Soros donations pushing them across the finish line. Here are just a few examples:

That’s just a partial list, but it surely corroborates Gingrich’s point that Soros “paid for” the outcomes of those elections, notwithstanding Harf’s unsubstantiated denial. In 2018 The Los Angeles Times reported that Soros spent $2,700,000 on California DA races alone, and another $16 million on 17 DA races in other states.
Look How Crazy These DAs Are

San Francisco’s new DA, Chesa Boudin, is a perfect example of the ideological temperament of the candidates Soros has been backing. Boudin is a former translator for the late Venezuelan socialist dictator Hugo Chavez.

He’s also the son of two Weather Underground domestic terrorists who were convicted of murder for their roles in a Brink’s armored car robbery that resulted in the killings of three people. Due to the incarceration of his parents, Boudin was raised by former Weather Underground leader Bill Ayers.

Huge contributions from the deep-pocketed Soros have made it nearly impossible for anyone to compete against his chosen candidates because DA elections rarely involve campaign war chests in excess of a few tens of thousands of dollars. Soros’s millions allow his candidates to bombard voters with propaganda, including commercials that smear Republicans as racists for fighting crime.
What Soros’s DAs Have Done In Office

Now let’s talk about what happens after Election Day, when the Soros-backed candidates start wielding their newfound power. Many of the following names will likely be familiar.

Foxx is well known as the DA who let actor Jussie Smollett escape prosecution after he hoaxed the nation by pretending he was beaten up by two men who allegedly shouted “This is MAGA country” in deep-blue Chicago, Illinois. A special prosecutor assigned to examine Foxx’s conduct in the case said there was “substantial abuses of discretion and operational failures” and determined she was guilty of “making false and/or misleading statements to the public.”

A recent report from the Law Enforcement Legal Defense Fund, moreover, found a 13 percent decline in guilty pleas or verdicts in felony cases and a 39 percent increase in dropped or lost cases after Foxx took office.

If you’ve had the misfortune of hearing Kim Gardner’s name, it’s probably because she’s trying to throw Mark and Patricia McCloskey in jail for defending their home by exercising their right to bear arms when they were threatened by rioters. Philadelphia DA Larry Krasner, along with Baltimore DA Maryln Mosby, threatened in an op-ed to have federal officers arrested if these prosecutors feel they overstep their authority in his district.

Boudin is one of the DAs on this list who refuses to prosecute what he calls “quality-of-life crimes” such as camping in the streets, offering or soliciting sex, public urination, and more. He also recently questioned whether spending money on law enforcement is “the most effective” use of tax dollars. He has also said that policing and incarceration “are tremendously expensive and are failed responses to what we are trying to deal with.”

Diane Becton of Contra Costa County, Calif. filed hate crime charges against David Nelson and Nichole Anderson for painting over a Black Lives Matter mural. Suffolk County, Mass. DA Rachael Rollins, along with Krasner and Boudin, is part of the also-Soros-backed “Truth, Justice, and Reconciliation Commissions” that team up with far-left activist Shaun King’s “Grassroots Law Project” to advocate for defunding the police. Yes, that’s the same Shaun King who recently called for people to destroy statues and stained glass windows that depict Jesus as white.

Before going on his spending spree in DA races, Soros also made a $50 million donation to the American Civil Liberties Union’s “Campaign to End Mass Incarceration” through his Open Society Foundation in 2014. Much of this money trickled down to local progressive groups who back these types of radical candidates as well.
Without Law and Order, You Don’t Have a Country

After watching the Fox News exchange involving Gingrich, Francis, Harf, and Faulkner, I wondered how anyone who works in the news business could be so uninformed about what Soros has been up to. The left-wing billionaire’s plan clearly operates on the understanding that all politics are local and takes advantage of small-ball local DA races to remake the American justice system — and, by extension, remake all of America into the far-left world of his dreams.

That leap from remaking our justice system to remaking America may seem like a long jump to some, but law and order is the core of America’s existence. Without law and order, you don’t have a country.

If you want to know what the next step is for Soros, it’s a continued expansion of funding for DA races, but also so much more. His recent pledge of $1 billion to endow a network of universities across the nation is part and parcel with his broader effort to promote his far-left ideology among impressionable young people.

Soros calls this initiative “the most important project of my life.” That should deeply concern ordinary Americans everywhere, and perhaps even inspire a backlash of small-dollar donations to fight Soros’s pernicious influence.

I believe that maintaining our freedoms and preserving the Constitution are two pillars of keeping America great, along with upholding the rule of law and properly educating our youth. Soros has a plan to systematically tear down those pillars, and we’re not supposed to talk about it. But we must, and we will.

Malloch-Brown Makes His Return To The Soros Mothership

Well done good and faithful servant: Soros appoints Smartmatic Voting System's chairman, Lord Mark Malloch-Brown, as President of his huge Open Society Foundation. FULL STORY
There are none so asleep & oblivious to the real world as those who are & would be Woken.

I saw that, honestly Riddick, I really don't think I can get any more Discusted, than I am at this time! Going to take a nap or read a worthless book and have a good day. Wishing you a good day also!