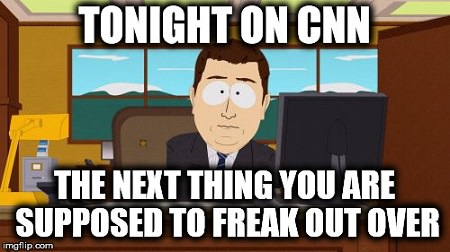 ‘Out of control,” “unhinged” and “downright mean.” A description of President Trump? Not this time. In recent voter interviews, these are phrases that voters across the political spectrum have used to describe the Democrats.

Some Democrats believe that this vigorous, profane resistance will charge up more voters. It doesn’t. Instead, it creates backlash, even among moderate voters.

From the point of view of voters across the country, shouting and cursing are drowning out any reasoned analysis, turning people off, and driving Trump supporters into his corner to support him regardless of his actual activities.

“The Democrats have gone from merely disliking Trump to a level of rudeness and resistance unlike anything I have ever seen. It’s really cringeworthy,” said Fred, a Republican energy-company manager from Akron, Ohio.

He added, “My wife and my sons are liberals, and even they are embarrassed at the behavior of the media and congress.”

Katie, a millennial from California and a self-described liberal, said, “I am literally freaking out because liberals are so unwilling to say anything positive about what is going on in our country. We sound biased and hysterical, and it is driving my friends away from the Democratic party.”

Added Mark, a journalism major at a Boston university, “It pains me to say this, but spin and condescension are the new code of the liberal media.”

Hearing nothing but negativity, most voters believe the liberal resistance led by the DNC, the media, and Hollywood has gone from outrage to hysteria, and from logical counterarguments to juvenile behavior and pigheadedness.

Democrats - whether on TV, in Congress, or running for office - have a choice. They can wring their hands and hope for a blue wave, or they can create and communicate an array of fresh solutions to our most difficult problems. They can shout that Trump is a pathological narcissist who needs to be impeached — or they can criticize the substance of Trump’s actions.

There has never been a time when we more badly needed thoughtful, innovative ideas and policies from our leaders and our institutions. Giving a standing ovation to DeNiro for crude f-bomb attacks may feel great but it does little to address the problems. And it’s not going to win elections for the Democrats.

FULL ARTICLE
There are none so asleep & oblivious to the real world as those who are & would be Woken.

This has been on my mind.......What draws people in, to actually embrace, and champion , Evil people and evil intentions. ? ?


A Snippet from article:

Initially, psychopaths are highly reliable, devoted and trustworthy, then suddenly and without provocation, they become extremely unreliable and show no regard or interest to how their actions affect the situation, regardless of its importance. Where they were once viewed as being honest and with sincere intentions, they will do a sudden about face and begin lying without concerns. This holds true even in small matters when there is no benefit in lying, yet the psychopath will choose to be untruthful.

Because psychopaths have mastered the art of deception by presenting such positive behavior at first, those around them are slow to accept the abrupt change and total disregard for the relationship that was built. When psychopaths are finally confronted with their lack of responsibility, honesty or loyalty, it generally has no impact on their attitude or future performance.

They are unable to perceive that other people value truthfulness and integrity.

Good question Doka - recently I read about the so-called Throne of Satan, and how it was dug-up from its place in modern-day Turkey and moved to Berlin in the late 1800s/ early 1900s and placed in the Berlin Museum. The design, allegedly, was used by Hitler in his Nuremberg rallies, which was captured in Leni Riefenstahl's Triumph of the Will which is available on YouTube.

Scary situation all the way around......
There you go man, keep as cool as you can. Face piles and piles of trials with smiles. It riles them to believe that you perceive the web they weave. And keep on thinking free. (Moody Blues)
Top

“The fact is, the very defeat of Hillary Clinton and the election of Donald Trump broke the grip on reality of many, many left-wing Democrats.” - Newt Gingrich

Mr. Gingrich is absolutely correct. The problem is they believe it's their right to trample on the rights of honest, law-abiding citizens to get what they want, to force their propaganda, not to mention their agenda, on the rest of us. Some even think it’s within their rights to use force to silence those who oppose their mantra:

No, it's not. While the law-breaker in the video above was IDed, reported to his employer, and summarily fired, sadly local law enforcemen failed to levy charges of assault and battery against him, despite clear and compelling video evidence.

Manufacturing outright and flagrant lies and grasping at every straw supporting their increasingly feeble position many, many Democrats, online and in person, are totally at odds with the people of integrity they used to be, with the wisdom and objectivity they used to have, their heads plunged deep into the sand.

So unwilling they are to let go of their psychosis, they burrow ever deeper into its depths. Like they people of North Korea, they’ve been lied to for so long, believing the propaganda machine with reckless abandon until they’re living in a dream world, only partially supported by the real world, but supportable no longer.

The beliefs held by the left do not merely “border” on psychosis. When the left elects leaders who flagrantly violate Senate and House rules, much less the law, calling on their constituents to commit acts of violence, things have gone way beyond “borderline” into a full-blown mass psychosis.

The question becomes: How do we, as a nation, cure their mental illness? Like the old adage about how “they have to want to be cured,” there’s no easy fix. It will take decades of education, and even that might fail if “educators” aka propagandists continue to indoctrinate students in the flawed thinking which shoehorns them into a political cesspool of Democrat psychosis.
There are none so asleep & oblivious to the real world as those who are & would be Woken.

"Inside every progressive is a totalitarian screaming to get out." - David Horowitz
Top
Post Reply
95 posts