A Socialists Dream/And The People Starving In The Streets

A Socialists Dream/And The People Starving In The Streets

"Socialism Has Produced Some Very Powerful Millionaires": As Venezuelans Starve In The Streets, The Elites Party On

If you point to a country like Venezuela, and say “See! This is what socialism leads to,” they’ll no doubt claim that it isn’t a real example of socialism. But if you went back in time by just a few years, you’d find that their perception of Venezuela was quite different.

Celebrities like Sean Penn, Oliver Stone, and Danny Glover praised the regime not too long ago, as did intellectuals like Noam Chomsky.

Six years ago, Bernie Sanders claimed that “the American dream is more apt to be realized in South America, in places such as Ecuador, Venezuela and Argentina.”

These days however, those voices are conveniently silent in regards to Venezuela. There’s always at least one “perfect” example of socialism for leftists to hold up, right up until that that shining example utterly fails.

But that is by no means the extant of their cognitive dissonance. While these same figures preach about how equitable socialism is, and rail against the 1%, socialist countries like Venezuela are run by tiny wealthy elites who are having a blast while their countrymen starve in the streets.

This always happens in socialist countries, because socialist regimes don’t distribute the wealth equally to everyone. Once the government has a firm grip on the economy, it can distribute that wealth to whoever is the most loyal to the regime.

Venezuelan Minister Sneers At U.S. Diplomat: ‘Send In Your Marines’

Venezuela’s fiery foreign minister clashed with a senior U.S. diplomat at an Organization of American States meeting Tuesday, saying mockingly that the only way a regional mediation initiative responding to the crisis in her country could be imposed on Venezuela would be to “send in your Marines.”

Foreign Minister Delcy Rodriguez did not take kindly to a proposal by Mexico’s foreign minister that the OAS set up a regional “contact group” in response to the political and economic crisis in the socialist-ruled country.

U.S. Deputy Secretary of State John Sullivan urged the OAS meeting in Cancun to “take a modest step to put together a group that would help facilitate a resolution of the serious problems which we all acknowledge are present in Venezuela.”

If the 34-member regional grouping could not agree on that at the very least, he said, “we seriously impair our ability to go forward as an organization.”

“The only way you could impose it would be to send in your Marines – who would meet with a crushing response from Venezuela if they dared make such a misstep,” she jeered.

Earlier, Rodriguez suggested U.S. wanted to intervene in her country in order to exploit its oil reserves.

Sullivan dismissed the arguments she put forward as “distractions, distortions, and irrelevancies.”

“The facts on the ground in Venezuela are apparent to all of us,” he said. “This is a moment of challenge for this organization to prove its relevancy.” FULL STORY
Top

Not exactly on topic, except as a regional issue - I found this story interesting. And may also explain some of the socialist influence in South America......

A large collection of Nazi artefacts found in Argentina this week may have come from the town of Solingen in North Rhine-Westphalia.

The Buenos Aires antiques dealer who was in possession of the Nazi relics told news agency DPA on Wednesday that most of the artefacts bore the stamp of the Solingen weapons manufacturer Carl Eickhorn, a company founded in 1865 that specializes in army knives. The company currently trades under the name Eickhorn Solingen.

Among the artefacts that bore the Carl Eickhorn stamp was an official Nazi eagle emblazoned with a swastika.

Around 75 Nazi objects, which Argentine officials say they believe to be genuine, were found in the private residence of the antiques dealer. Among them were pistols, busts of Adolf Hitler, swords and harmonicas.

The dealer denied having done anything illegal, adding that he had not attempted to sell the Nazi relics, but had them on display in a private room in his house.

Argentinian police have seized the antiques claiming that they were of “illegal origin.” A police source told the Associated Press that "they suspect they are originals that belonged to high-ranking Nazis in Germany during World War II."

Several high-ranking Nazis, including Adolf Eichmann and Josef Mengele, fled to Argentina after the end of the Second World War.

But the Rheinische Post has a more mundane explanation for how the Nazi objects could have ended up in Argentina. The relatively large German community in the country during the 1930s was strongly pro-Nazi - around 10,000 Germans took to the streets of Buenos Aires to celebrate the Anschluss (joining) with Austria in 1938. The objects could have easily been shipped across the Atlantic by various Hitler supporters during the period before the German defeat in 1945.

https://www.thelocal.de/20170621/clues- ... f-solingen
What the hell are we fighting for? Ah, just surrender and it won't hurt at all. You just got time to say your prayers. Yeah, while you're waiting for the hammer to fall. (Brian May of Queen)
Top

Venezuela’s opposition published photos this weekend of men butchering a dead dog on the streets of Caracas, preparing the meat for cooking in a nation that has been forced to take increasingly extreme measures to avoid a famine.

Dogs are far from the only animals safe from starving Venezuelans. In August, zookeepers in Zulia state told reporters that local residents had begun stealing their animals for food. Among the most coveted targets were collared peccaries (a boar-like mammal) and buffalo.

Venezuela first officially declared that it had run out of food in February 2016. Venezuelans had faced years of shortages of basic goods such as flour, vegetable oil, and milk, and dictator Nicolás Maduro imposed a ration system to limit distribution in 2014.

Just like his predecessor Chávez, Maduro also imposed strict price controls on food and tampered with the market to such an extent that Venezuela became highly dependent on exports and extremely unproductive domestically.

As a result, by 2017, many Venezuelans (an estimated 15 percent) had taken to eating food waste from industrial garbage dumps. Images of children digging through dumpsters for food have become increasingly common.

The average Venezuelan unintentionally lost 19 pounds in 2016, and most cannot procure three meals a day for themselves or their children.

Are clueless celebs like Michael Moore, Noam Chomsky, & Naomi Campbell embarrassed by their praise for Maduro’s brutal regime? John Stossel looks at the crisis in Venezuela and asks American defenders of the socialist government whether they have changed their minds.

venezuela’s Supreme Court has progressively dismantled the rule of law, becoming an instrument of President Nicolas Maduro’s government in what amounts to a coup against the constitutional order, an international human rights group said on Tuesday.

The collapse of the judiciary has left victims of torture, killings and disappearances and their families without recourse to justice after months of violent street protests, the International Commission of Jurists (ICJ) said. It called on the U.N. Human Rights Council to take action.

“We have seen a judiciary that has essentially lost its independence and become a tool of a very authoritarian executive branch,” Sam Zarifi, ICJ Secretary-General, told a news briefing.

“This breakdown of the rule of law has also severely obstructed accountability (and) essentially made it impossible to bring to justice those responsible for gross violations of human rights,” he said.

The Venezuelan government did not immediately reply to a request for comment. FULL STORY
Top

Trump: Venezuela's Problem Is That 'Socialism Has Been Faithfully Implemented' There

Trump added that wherever socialism or communism is implemented, such as the former Soviet Union, Cuba, and Venezuela, it leads to political repression, executions, "anguish" and "failure."

"We call for the full restoration of democracy and political freedoms in Venezuela," said President Trump.

"Those who preach the tenets of these discredited ideologies only contribute to the continued suffering of the people who live under these cruel systems," said the president.

"We have also imposed tough, calibrated sanctions on the socialist Maduro regime in Venezuela, which has brought a once thriving nation to the brink of total collapse.

"The socialist dictatorship of Nicolas Maduro has inflicted terrible pain and suffering on the good people of that country. This corrupt regime destroyed a prosperous nation by imposing a failed ideology that has produced poverty and misery everywhere it has been tried. To make matters worse, Maduro has defied his own people, stealing power from their elected representatives to preserve his disastrous rule.

"The Venezuelan people are starving and their country is collapsing. Their democratic institutions are being destroyed. This situation is completely unacceptable and we cannot stand by and watch.

"As a responsible neighbor and friend, we and all others have a goal. That goal is to help them regain their freedom, recover their country, and restore their democracy. I would like to thank leaders in this room for condemning the regime and providing vital support to the Venezuelan people.

"The United States has taken important steps to hold the regime accountable. We are prepared to take further action if the government of Venezuela persists on its path to impose authoritarian rule on the Venezuelan people.

"We are fortunate to have incredibly strong and healthy trade relationships with many of the Latin American countries gathered here today. Our economic bond forms a critical foundation for advancing peace and prosperity for all of our people and all of our neighbors.

"I ask every country represented here today to be prepared to do more to address this very real crisis."

It is so very difficult for people to tie the seemingly harmless, utopian , Bernie Saunders type of Socialism, to what is going on in Venezuela , yet it is the very same! The "Believers " will tell you over and over again , that it "just wasn't done right", over and over again, or some other such nonsense.

Insanity........doing the same thing over and over and expecting different results. 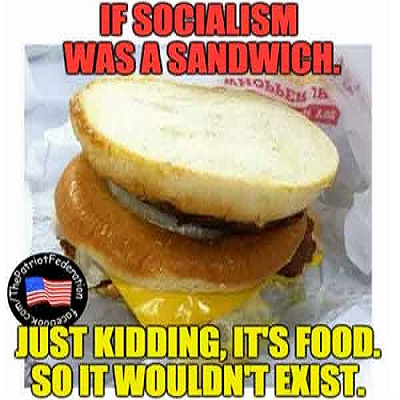 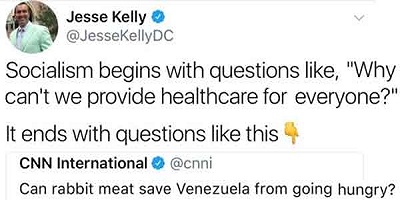 From 172 To 115 Pounds: The Faces Of Venezuelan Hunger

“They Have No Right To Starve Someone This Way”
The economic chaos in Venezuela has lead to strict food rationing, surging malnutrition, and, in some extreme cases, starvation. FULL STORY
Top

Zerpa and Soto ? The whole article sounds like they are writing for "Weight Watchers" I look at these people's faces and wonder if they would go nuts, if someone suggested, "they got what they voted for" ?

“They have no right to starve someone this way.”

By Fabiola Zerpa and Noris Soto

Happy Thanksgiving! But before you eat that turkey, thank private property! Without it, Thanksgiving would be "Starvation Day." Here's why...