More than 140 women in California’s Capitol — including legislators, Capitol staff, political consultants, lobbyists and the congresswoman’s own daughter Christine Pelosi — signed a letter on Tuesday calling out a “pervasive” culture of sexual harassment and mistreatment there.

“I don't have that experience in Washington, D.C. I just don’t,” Pelosi said when asked if the nation’s Capitol had the same problem. “I have not seen that.” FULL STORY 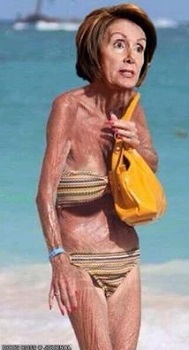 Any big surprise? I mean, Grade A sexual harassment material, she isn't. What's the attraction? A figure made for celibacy and a face only a Marxist could love? 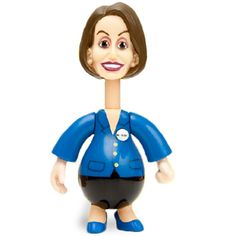 What a fine spokes woman, for the Democratic Party.


No wonder the federal government is spending so wildly when leaders can’t tell a number that has 9 zeros from one that has 12.

“This is about the American people and how policy here affects them,” she said. After staring and murmuring something softly, she blurted out “low,” before continuing, “instead let’s go to the table…”

Answering a reporter’s question, she started by uttering gibberish, before recovering and saying, “We’re here for the American people…”

Seconds later, she said, “Education being essential. Education, by the way, being any money being spent on education that—” she said before stopping and staring at reporters, and continuing.

Pelosi suffered another facial spasm when she attempted to say “declaring an emergency.”

Suffering an apparent brain freeze, Pelosi said, “House and Senate, Democrats and Republicans and the White House, as to uh— what— when that will happen,” blurting it out.

“It has to happen soon so that we can have it done, uh, by the um— the end of the— con— ca— uh, the continuing resolution,” she finally said.

Is it any wonder more Democrats are calling for new leadership?

Pelosi UNGLUED, Says Tax Reform Is 'End Of The World'

Riddick wrote: ↑
10-06-2017 12:52 AM
Pelosi’s deputy chief of staff, Drew Hammill, responded Thursday that she “enjoys wide support in the caucus and has always said she is not in Congress on a shift but on a mission. Leader Pelosi is focused on winning back the House, and anything else is a distraction from our path to the majority.”

So I take it this is where the path to win back the House begins? I would really miss her if she , went away. I used to feel embarrassed, for her. She believes she doing fine, so all is good!

Nancy Pelosi had a bear of a time making it through a 6-minute speech on Wednesday.

While honoring members of the Office of Strategic Services for their actions during World War II, the House Minority Leader suffered numerous brain glitches during the short remarks.

As compiled in a video by The American Mirror, Pelosi misspoke, repeated words, froze, or garbled words no less than 23 times during a speech that clocked in at about 5:33. Nancy Is The New Hillary Although it's just a Quartz, NRA hit piece, The ad was great!

It appears the most likely scenarios to date indicate the California Democrat won’t retain her leadership mantle. FULL STORY
Top

Nancy always reminds me of "Aunt Clara" On the TV Show "Bewitched" who collected door knobs and got stuck in chimneys not a very good witch, but very entertaining...........

Following the better than expected jobs data pushed the unemployment rate to its lowest in almost 50 years, the California politician issued a statement seemingly proclaiming that all of this is bad news for US workers.

'So given her extreme disappointment in the fact that her predictions of doom and gloom did not work out, perhaps it is little wonder that following today's strong jobs numbers, she felt the need to go full Orwell - "war is peace, love is hate, jobs are bad"...


The Rest of "The Nancy Non-logical rant"

But Nancy won't say that. At least, not publicly. That cognizant, she is.
Top

Saint Nancy Of Frisco VS BeelzeTrump Pelosi: GOP Compromising "With The Devil"
House Democratic leader says Republicans are compromising ''with the
devil'', not Democrats, on two immigration bills up for votes on Thursday.
Top
Post Reply
42 posts