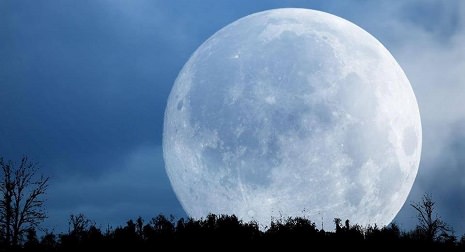 Sunday night's Full Cold Moon – a bigger and brighter full moon than usual – will kick off a very special "supermoon trilogy," NASA says. The Dec. 3 full moon is the first of three consecutive supermoons, including a lunar eclipse. The other supermoons will happen on Jan. 1 and Jan. 31, 2018.

If you only have time to catch one of them, be sure to check out the "extra-special" Jan. 31 supermoon, NASA said in a statement Friday (Dec. 1). The late January supermoon will take place during a total lunar eclipse visible from western North America, the Pacific and Eastern Asia. It will also be a blue moon, too.

A supermoon occurs when the full moon is at the closest point of its orbit to the Earth, which is also called the perigee. That makes the moon look extra-close and extra bright — up to 14 percent bigger and 30 percent brighter than a full moon at its furthest point from Earth, called the apogee.

Pair that up with a lunar eclipse, and you will have a spectacular view of the moon turning dark as it moves out of the sun's light and into the shadow of the Earth. Only the light reflected off Earth will be visible on its surface, producing a ruddy red-brown color on the moon's surface during totality.

"The lunar eclipse on Jan. 31 will be visible during moonset. Folks in the eastern United States, where the eclipse will be partial, will have to get up in the morning to see it,” said Noah Petro, a research scientist from NASA’s Goddard Space Flight Center, in the same statement. "But it’s another great chance to watch the moon."