Can we blame the northern California migrations of illegals from south of the border, for taking jobs young American's won't do in the "field$ of pot"

COPPEROPOLIS, Calif. (AP) — The four young men had just started their marijuana harvest in rural Northern California when a dozen sheriff's deputies swooped in with guns drawn, arrested them and spent the day chopping down 150 bushy plants with machetes.

"I could do this every day if I had the personnel," Calaveras County Sheriff Rick DiBasilio said during the operation near the Sierra foothills town of Copperopolis, about two hours east of San Francisco. Authorities this year have cut down close to 30,000 plants grown without permits in a county that is reconsidering its embrace of marijuana cultivation on the eve of statewide legalization.

"There are just so many of them," the sheriff said of the illegal farms. "It's never-ending."

Law enforcement officials say they have raided farms where they've found pesticides that are banned in the U.S.

"It has changed our way of life," said Bill McManus, head of an organization seeking to ban marijuana in Calaveras County. "The environmental impacts are atrocious."

It's from me again> So let's all say a heart felt prayer for the soil and water environments of central and northern California. Where Mother Earth has already gone and will continue to go, to pot

They don't call northern California "The Emerald Triangle" for no reason..........

The Emerald Triangle refers to a region in Northern California which is named due to it being the largest cannabis-producing region in the United States. Mendocino County, Humboldt County, and Trinity County are the three counties in Northern California that make up this region. Growers have been cultivating cannabis plants in this region since the 1960s (during San Francisco's Summer of Love). The industry exploded in the region with the passage of California Proposition 215 which legalized use of cannabis for medicinal purposes in California.[1] Growing cannabis in The Emerald Triangle is considered a way of life, and the locals believe that everyone living in this region is either directly or indirectly reliant on the marijuana business.[2] 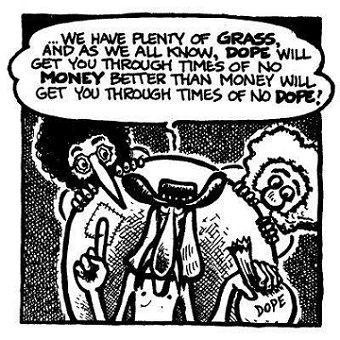 "Inside every progressive is a totalitarian screaming to get out." - David Horowitz
Top
Post Reply
18 posts