City attorney Chris Smith says the community is pretty pumped to see the project finally get underway. The plan is for the area to look like a minature park.

The layout will be a brick plaza resembling a wrestling ring. Fans can buy bricks online and have them engraved with a message. The money will help pay for the big unveiling party. 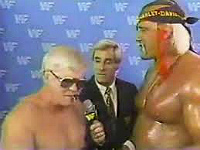 The Crusher & The Hulkster
Top

Re: Crusher Statue Site Gets The Green Light! Do 'THE CRUSHER Foundation,' Ya Turkeynecks!