The Biden's and "China Inc"

The Biden's and "China Inc"

Treason:The betrayal of allegiance toward one's own country, especially by committing hostile acts against it or aiding its enemies in committing such acts....

All this before Trump was even in the Picture, 4 years ago you where taught to Hate him..........

Newly obtained emails from a Hunter Biden business partner lay out in detail how the Vice President’s son and his colleagues used their access to the Obama-Biden administration to arrange private meetings for potential foreign clients and investors at the highest levels in the White House. These never-before-revealed emails outline how a delegation of Chinese investors and Communist Party officials managed to secure a private, off-the-books meeting with then-Vice President Joe Biden.

In a 2011 email, Hunter Biden’s business associates also discussed developing relations with what one called “China Inc.” as part of a “new push on soft diplomacy for the Chinese.” These emails are completely unconnected to the Hunter Biden emails being released by the New York Post.


These and more explosive never-before-revealed emails were provided to Schweizer by Bevan Cooney, a one-time Hunter Biden and Devon Archer business associate. Cooney is currently in prison serving a sentence for his involvement in a 2016 bond fraud investment scheme.

In 2019, Cooney reached out to Schweizer after becoming familiar with the revelations in his 2018 book Secret Empires. Cooney explained that he believes he was the “fall guy” for the fraud scheme and that Archer and Hunter Biden had avoided responsibility.

WE Will be paying for this for ever.

And They have accused Trump of Every Thing They Have Done. It Boggles the mind, their tremendous capacity for EVIL .

Schweizer: Hunter Biden Had ‘United Nations of Corruption’ and Joe Biden Was ‘the Planet’ It Moved Around

On Friday’s broadcast of the Fox News Channel’s “Hannity,” Breitbart News senior contributor and Government Accountability Institute President Peter Schweizer stated that the emails obtained from Hunter Biden’s one-time business associate, Bevan Cooney, show “a veritable United Nations of corruption” and that 2020 Democratic presidential nominee former Vice President Joe Biden, “as vice president of the United States, was a center point. It was almost the planet around which these business activities moved.”

Schweizer said, [relevant remarks begin around 3:40] “[W]hat those emails show, the 26,000 show, we’re working our way through them, is a wide net of using the Biden name, using access to the White House, serving — Hunter serving as the pipeline to the administration as means to help their clients and gain clients. The names that come up in this are the Chinese, the Russians, the Ukrainians, the Kazakhs. It’s a veritable United Nations of corruption. And what it demonstrates is that Joe Biden, as vice president of the United States, was a center point. It was almost the planet around which these business activities moved.”

Hear No Evil See No Evil Speak No Evil 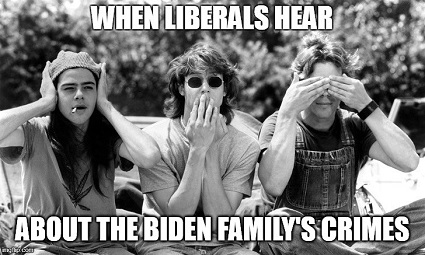 'It ain't corruption if Dems do it'

Nothing to see here. Move along.
"Inside every progressive is a totalitarian screaming to get out." - David Horowitz
Top

My biggest Understatement "What A Mess"!! It will come down to "Personal " as ALL things do. There is Nothing, but Karma in the end. I will Not be trading my Karma in, for anothers, ever!


GO VOTE!! IT DOES MATTER, In the Monumental Scheme Of The Universe.
Karma Rules
Top

Some folks think, in the grand sceme, if voting made a differece it'd be illegal...

JoeMala gets in? They'll keep it around, but for sure it won't change anything -

If the Dems take over, the 2020 election may be the last time voting matters.
"Inside every progressive is a totalitarian screaming to get out." - David Horowitz
Top

If the Dems take over, the 2020 election may be the last time voting matters.


So True, just like "Lenin's/Marxist Russia" Hard to imagine even Democraps surving that one...........
Karma Rules
Top

Mr. Cooney is no doubt, very wise to be afraid. Democraps live for Revenge. I am sure he and the other "Biden Associates" are tired if rotting in Prison, while Big Daddy "B" runs for President. It's so fun to be an Elite!

Bevan Cooney, the former business associate of former Vice President Joe Biden’s son Hunter Biden who flipped on the Biden family, has been moved from his cell, sources familiar with the matter confirmed to Breitbart News.

On Tuesday, several days after emails Cooney provided to Breitbart News senior contributor Peter Schweizer and journalist Matthew Tyrmand became public, federal agents moved him from his cell to protect him. Tyrmand, who is in contact with members of Cooney’s family, told Breitbart News that Cooney was moved from his cell in a federal prison in Oregon around 11:00 a.m. local time on Tuesday. Tyrmand said that Cooney spoke with family members multiple times on Tuesday, which he said is “much more than usual.”

"Bevan could sense that things had changed with the rise in visibility of his story,” Tyrmand said.

Cooney’s family stressed to Tyrmand they are “extremely concerned given the nervousness gleaned from Bevan’s reaction this morning and they would appreciate a sign from the powers that be that Bevan is in protective custody.” It is unclear where Cooney has been moved to, and in whose custody he currently is.