What it Looks Like To Be A Leader of The People

What it Looks Like To Be A Leader of The People

Thank You Mr President, You did every thing You could to save the former United States of America. Bless You.


What it Looks Like To Be A Leader of The People

President Trump went through four years of hell to save the country from the insane policies of the Obama Administration. He lost a billion dollars doing it.

President Trump offered up his annual salary and gave it to charities. In spite of this, how many Trump supporters were told that President Trump was only pushing policies to help his businesses.

Never was the media transparent about all President Trump gave up to save the country. In addition, President Trump was spied on by members and holdovers of the Obama Administration. He was lied to. He and his team were set up and arrested on bogus charges. They were slandered by the corrupt and evil Big Media every minute of every day and censored by Big Tech.

But President Trump kept moving forward and doing all he could for the country. It would have been amazing if the other politicians in Washington DC and around the country worked with him, but instead they joined forces to block him and prevent him from making Americans’ lives better. Despite all this, President Trump did more for America than arguably any President in US history.

Former President Donald Trump lost close to half of his wealth during his time serving as president.

Trump left office with a net worth of about $2.5 billion, down from $4.5 billion when he announced his candidacy for president in 2015.

Trump was no. 121 on Forbes’s list of wealthiest Americans when he entered office. He saw his net worth fall from $3.1 billion in 2019 to the current $2.5 billion amid an economic recession brought on by government lockdowns that severely hit industries where Trump held many assets.

There isn’t a politician in America who gave up so much to save this country. The media and those attempting to rule this nation are evil. This is why they hated President Trump so much and did all they could to remove him from power.

A Message From Rush Limbaugh to President Donald J Trump
Posted on February 6, 2021 by Sundance

“My days on earth are numbered; But before I fade away, there is something important I need to say. It may not be important to anyone else; but it’s important to me. Win, lose or fraud President Trump, I just want to say thank you for the last four years.

Thank you for making it cool to be an American again. Thank you for showing us that we don’t need to be under China’s thumb anymore economically, or any other way. Thank you for one of the strongest economies we’ve ever experienced in my lifetime.

Thank you for all you have done for the minority communities, and the outstanding decrease in the unemployment rate you had. Thank you for making it feel good to love our country and to be a proud patriot again.”

Thank you for quelling the flood of illegal immigration, and bringing to justice the thousands of criminals that flood brought us. Thank you for giving corporations a reason to come back to America to make our own products and put Americans back to work.

Thank you for bringing our troops home from endless deployments that presented us with little more than body bags; and for your commitment to strengthen our military.

Thank you for operation warp speed and keeping your promise to bringing the Covid 19 vaccine to us in less than a year. Thank you for your never-ending attempts at bringing peace to the Middle East and your support for Israel.

Thank you for your Tax relief, and thank you for our energy independence. Most of all though…

THANK YOU for taking a damn rotten job that you never had to take!! Thank you for caring enough for this country to want to try and make a difference.

Thank you for allowing us to experience a President that wasn’t a lifelong politician, but a lifelong American. THANK YOU MR PRESIDENT… YOU DID YOUR BEST…”
KARMA RULES
Top

Barf! How can you read all that garbage? I quit after the first 2 sentences.
“For evil to flourish, it only requires good men to do nothing.” Simon Wiesenthal
Top

He Loved his Country, he will be missed by many.

His wife Kathryn announced the news on his radio show, Fox News reported. Limbaugh’s death follows his announcement in January 2020 that he was diagnosed with Stage IV lung cancer. Throughout his battle, Limbaugh continued hosting his radio show, “The Rush Limbaugh Show.”

While Limbaugh had many well-known moments throughout his career, Fox News described his 2009 speech at the Conservative Political Action Conference as “one of the most important moments” for his work. During this speech, Limbaugh aimed to detail exactly “who conservatives are,” saying that they “love people” and see “potential” in everything.


“We love people,” Limbaugh told the crowd. “When we look out over the United States of America, when we are anywhere, when we see a group of people, such as this or anywhere, we see Americans. We see human beings. We don’t see groups. We don’t see victims. We don’t see people we want to exploit. What we see — what we see is potential. We do not look out across the country and see the average American, the person that makes this country work. We do not see that person with contempt. We don’t think that person doesn’t have what it takes.”

Mark Steyn's Tribute To Rush
There are none so asleep & oblivious to the real world as those who are & would be Woken.

Thanks Riddick, for posting

Here is another by David Horowitz

A great American is no longer with us.

A great American is gone. Rush Limbaugh devoted his life and his great talents to defending the country he loved against its enemies without and within. Therefore, we have also lost a great warrior in the struggle for human freedom. For America remains – as Lincoln said, “the last best hope of earth.” In the same breath, Lincoln also warned that “we shall nobly save, or meanly lose” this hope. Rush was a shining model for all those patriots who are fighting to nobly save this great human experiment, which is under siege today. 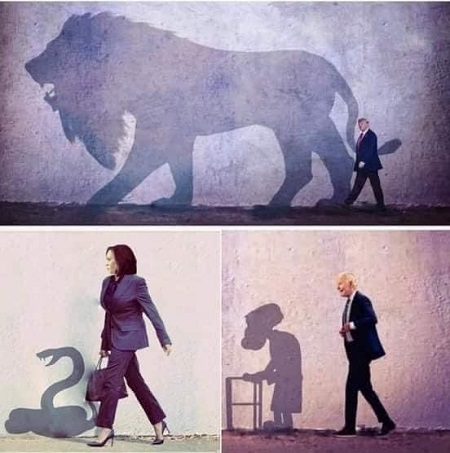 The Communist Democrats will have none of this kind of talk! Their portrayal of stupid, stifeled ,black skinned people is getting old, Ophra and her rich groupies have made millions off of this. The divison and guilt making Democraps make billions off this and keep the Divison fed, like the ever hungery wolf.
Plus the fact I had to find this in a foriegn paper. The MSM is not going to let this out with some "name calling and creative writing!


'Slavery ended over 130 years ago:' NFL legend Herschel Walker says black Americans should not be paid reparations and calls for 'forgiveness' at congressional hearing

'How many African-Americans was alive today that was in slavery? None,' he said

'Reparations teach separation,' he added. 'Slavery ended over 130 years ago. How can a father ask his son to spend prison time for a crime he committed?'

The athlete also questioned where the money would come from, and how the government would determine who should receive it


Walker made his case to members of the Judiciary subcommittee on the Constitution, Civil Rights, and Civil Liberties who met via Zoom on Wednesday to discuss House Resolution 40, which aims to 'establish a commission to study and consider a national apology and proposal for reparations for the institution of slavery'.

The athlete, who played for the University of Georgia and won the Heisman Trophy in 1982 before going pro, asserted that compensating black Americans for the lasting impacts of slavery would cause more harm than good.

We use black power to create white guilt,' Walker, a longtime friend of former president Donald Trump, told the subcommittee. 'My approach is biblical...how can I ask my Heavenly Father to forgive me if I can't forgive my brother?


Walker went on to rant about the impracticality of reparations, given that slavery was abolished so long ago.

'How many African-Americans was alive today that was in slavery? Which is none,' he said.

'I understand that those pictures are horrible,' Walker said, referencing photos of a beaten slave and lynched black Americans that HR 40's sponsor, Rep Sheila Jackson Lee (D - Texas), presented at the start of the hearing.

'But right now, I think the fact finding is going to be very difficult to go back over history when history is not even taught in school on what we're trying to in fact find.'

He continued: 'Where would the money from from? Does it come from all the other races except the black taxpayers?

'I feel it continues to let us know we're still African American, rather than just American. Reparation or atonement is outside the teaching of Jesus Christ.'

Walker was joined in the opposition by talk show host Larry Elder, who argued that systemic racism is not the main problem.

'Obviously there are black people who are poor, the extent of which the poverty is a result of slavery and Jim Crow is tenuous at best,' Elder said. 'The larger factor behind black poverty is the absence of fathers in the home.'

Elder also called reparations for slavery the 'greatest generational transfers of wealth back and forth, because virtually every people on the face of the earth was involved in slavery.'

Rep Burgess Owens, a freshman Republican from Utah, used the venue to place blame on the Democrats for most of the US's sordid racial history.

'It has not been an American problem, it has been pretty specific. When you think about where slavery began, where segregation, where Jim Crow, it's always the Democratic Party,' Owens said.

'Earlier we mentioned 40 acres and a mule, that was ended by a Democratic president, Andrew Johnson, we talked about the KKK, that was a Democratic terrorist organization that actually was ended, at the end of the 1880s, but brought back again by Woodrow Wilson in 1915,' he continued.

Owens - one of just two black Republicans in the House - called reparations 'impractical and a non-starter' and said it was 'unfair and heartless to give black Americans the hope that this is a reality'.

'The reality is that black American history is not a hapless hopeless race oppressed by a more powerful white race,' he said, calling the current inequities 'the failure of policies'.

Democrats led by Jackson Lee brought in their own array of witnesses to support the bill, including academics, civil rights leaders and California's new secretary of state, Shirley Weber.

The resolution to study reparations was first introduced by the now late Rep John Conyers in 1989 and was named after the '40 acres and a mule' that freed black Americans had been promised, but then the federal government didn't act on.