The Clintons were all smiles this weekend in the Hamptons after the New York City medical examiner officially ruled Epstein’s death a suicide by hanging.


Joseph Moinian, who was born into a Jewish family in Iran, came over to the US when he was 17 years old.

His wife Nazee was a member of Hillary Clinton’s foreign policy team on Iran.

Via the Daily Mail:

Moinian has supported Hillary ever since her Senate days, donating $10,000 to her various election funds over the years according to FEC filings obtained by DailyMail.com.

He was born in Tehran, where his father was a major player in the Iranian real estate market, and at the age of 17 decided to leave his family and immigrate to the United States.

He attended school and briefly started a women’s fashion line before opening his real estate investment firm The Moinian Group in 1982.

Moinian is a noted philanthropist as well, donating $5 million to the 9/11 fund and is currently member of the board of the 9/11 Museum.

His wife Nazee has worked as a UN envoy and was a member of a member of Hillary’s foreign policy advisory team on Iran.

Hillary is happier than ever after the NYC medical examiner ruled Epstein’s death a suicide. (photos via Instagram)

The "Swamp" just keeps getting deeper, darker, and more deranged, like the current followers.


Trump-Russia and Clinton-Libya: A Story of 2 Probes and the FBI


Records recently posted online by the FBI indicate that it did little to investigate allegations from private sources connected to Republicans about a scheme in which associates of Secretary of State Hillary Clinton tried to exploit their connection to her to profit from the turmoil in Libya in 2011.

The FBI received the documents in June 2016, around the same time it launched an exhaustive, three-year investigation of the Trump campaign’s ties to Russia based, in part, on information from private sources connected to Democrats that in the main would prove to be false – the Steele dossier.

The bureau’s different responses to these documents also came during the same period when FBI Director James B. Comey controversially cleared Clinton, in his first of two exonerations, of criminal wrongdoing in the bureau’s probe of her unauthorized and insecure email setup.

The documents, quietly released as part of the FBI’s case files for the “Midyear Exam,” its code name for the Clinton email investigation, revive a lingering mystery from Clinton’s tenure as the nation’s chief diplomat: Why did Sidney Blumenthal, the former journalist and Bill Clinton White House aide, send her a series of detailed memos and reports about Libya beginning in 2011?

The documents offer an answer. They allege that Blumenthal sent the emails as a "quid pro quo" to free up classified State Department financial intelligence to help Libya recover as much as $66 billion spirited offshore by slain strongman Moammar Gadhafi.

Out of that, Blumenthal and associates stood to gain a brokers' cut of perhaps hundreds of millions of dollars.

Sidney Blumenthal, one of Bill and Hills best buds and game to kill and maim as many as necessary, to get money , Big money. Was barred from the Obami White House, I consider that as simply as a conflict on the "WHO" and "HOW" to eventually over throw America the Country. There ARE several players in that game. Bill and Hill mainly interested in Money, well ,untill she lost the election. Then she signed on to oust Trump, seriously, by buying her share of the The Fake dossier on Trump, with her own(stolen) money. That project, was even started BEFORE he was elected President!

It must have been difficult to keep tabs on Hitlery's sticky fingers. Every country that was faced with disaster at the time, there.... she was, ready to grab the relief money!

OMG! What very dirty dirt that all is Doka!

That lady is packing a whole dump truck load of dirt. But her tailgate's pins are dogged (the moving latches) downward and won't budge!

E. Warren now has a shadow in the form of Hitlery according to The Drudge Report on Sunday! Hmm! Could there become two ladies at the top in 2020 winning it all! Consider that one all day long folks! 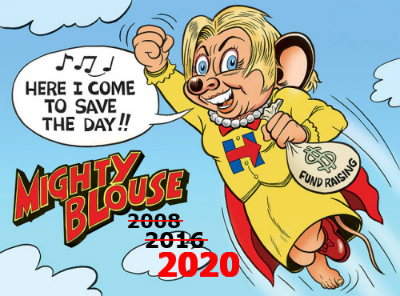 Based on bookies' bets and a few recent actions, speculation is once again starting to grow that Hillary Clinton may enter the Democratic Party presidential nominee race. Is a Trump vs Hillary Round Two possible?

With Biden down - spun as "smeared by Trump" - who better than Hillary to step in statesman-like to defend Americans' democracy? Judging by the bookies', admittedly still outside, odds, it is possible... We are sure the President will look forward to that. 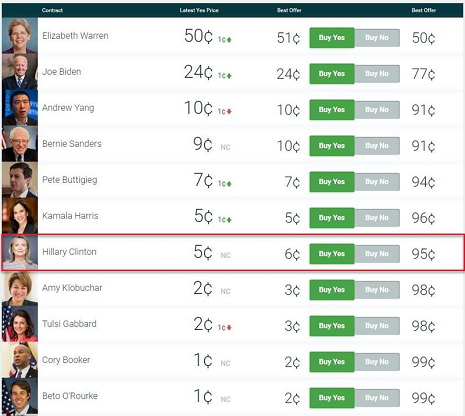 Don't Doubt it one bit!

The odds of Hillary Clinton entering the 2020 presidential race and winning the Democratic nomination jumped to third place per PredictIt, as rumors swirl that she'll be back to take another bite at the apple.

The jump in popularity comes as Joe Biden faces uncomfortable questions over whether he abused his position as Vice President to engage in profiteering with his son Hunter in Ukraine and China.

Meanwhile, Elizabeth Warren was caught in yet another lie about her past - after video and documentary evidence disproved her claim that she was fired from a teaching job for being "visibly pregnant," when she left voluntarily.

On Monday, a Rasmussen poll had Hillary "neck-and-neck" with President Trump in a hypothetical rematch despite a majority (71%) responding that she shouldn't run.

http://i.imgur.com/RaHz0UM.jpg
There are none so asleep & oblivious to the real world as those who are & would be Woken.

The question is "What in the Hell" did she give away to get all the money?? Don't be surprised, I think it was our Future, but, stired up haters, don't have a "future" anyway ,and the rest have a great future to look forword to

Honestly! This female toad, actually believes she is a Princess!

Hillary Clinton: 'Obviously, I Can Beat Him Again'

The only thing Hillary Clinton does well is lose presidential elections. She's done it twice now, and she's really perfected the art form. She's driven by her overweening ambition and seething resentment of anybody who disagrees with her about anything, so she keeps seeking the highest office in the land. Unfortunately, she's held back by her robotic rictus grin, utter lack of charm, and decades of enabling an alleged serial sexual predator. She's just a bad candidate and pretty obviously a bad person. Many Americans would vote for literally any other woman in the world but her. She is singularly awful, and whatever else you might not like about Trump, at least he beat her.

One of the theories about Trump's prodigious tweeting is that he trolls his opponents into such a state of rage that they make mistakes, to his advantage. I'm skeptical that there's any sort of planning or forethought to any of it, but sometimes it really works. It sure worked with Hillary Clinton:

Hillary just sat down with PBS's Judy Woodruff to promote some stupid book, and she was asked to react to this. Boy, did she ever:


"You know, it truly is remarkable how obsessed he remains with me. But this latest tweet is so typical of him. Nothing has been more examined and looked at than my e-mails. We all know that. So he's either lying or delusional, or both. There was no subpoena, as he says in a tweet this morning. So maybe there does need to be a rematch. Obviously, I can beat him again."

She actually said this. On camera and everything:

Oh I hope Hillary runs. Keep things interesting and would piss off Trump.
“For evil to flourish, it only requires good men to do nothing.” Simon Wiesenthal
Top

Tulsi, the only Dem Candidate, not totally "Bonkers" is getting Ed-U-Cated by her Party of Choice. Mary Ann Williamson is nothing but, a oily spot on the highway Democrat 101. They eat their own when they don't pass the "Hate" test. Don't ya know?.........

If you call that a "veiled" shot, the author is still living in a Fairy Tale.

Clinton Takes Veiled Shot at Gabbard: ‘She’s the Favorite of the Russians’ to Run Third-Party

Former Secretary of State Hillary Clinton took a veiled shot at Rep. Tulsi Gabbard (D-HI) on Friday, alleging the congresswoman was being groomed by Russia to be a third-party candidate in 2020.

The failed 2016 Democrat nominee, who has accused President Donald Trump of being Russia’s “puppet” in the past, made the remarks during an interview on David Plouffe’s Campaign HQ podcast, while discussing Russian interference. Clinton suggested during the exchange that Russian President Vladimir Putin was grooming a stalking horse candidate to ensure Trump would be reelected.

“I’m not making any predictions but I think they’ve got their eye on somebody who is currently in the Democratic primary and are grooming her to be the third-party candidate,” Clinton said. “She’s the favorite of the Russians.”

DIARRHEA OF THE MOUTH

THIS Is What Happens

Nominate HRC: 'Cause She's So God Forsaken Lawless She Freaks Out Hitler

So get it right this time people!!

IT'S A MIRACLE! All Hail The Magical Dairy Queen!

OH Absolutely
She's a shoe-in. No bout adoubt it.

Just like they thought last time eh...?
There are none so asleep & oblivious to the real world as those who are & would be Woken.

Good Lord, no, not Hillary...................
There you go man, keep as cool as you can. Face piles and piles of trials with smiles. It riles them to believe that you perceive the web they weave. And keep on thinking free. (Moody Blues)
Top
Post Reply
686 posts