As we reported yesterday, Hillary Clinton recently opened the attack on both Tulsi Gabbard and Jill Stein, accusing them of being Vladimir Putin's little puppets.

Sadly for Mrs. Clinton, Tulsi doesn't take such accusations lying down. Neither should she, of course. After all, unlike Hillary, Tulsi has actually served her country as a soldier. She has literally put her life on the line for America. Being accused of being a "Russian tool," then, is a very serious accusation in her eyes; one that she isn't willing to tolerate.

"Great! Thank you Hillary Clinton," Tulsi writes on Twitter. "You, the queen of warmongers, embodiment of corruption, and personification of the rot that has sickened the Democratic Party for so long, have finally come out from behind the curtain. From the day I announced my candidacy, there has been a concerted campaign to destroy my reputation. We wondered who was behind it and why. Now we know -- it was always you, through your proxies and powerful allies in the corporate media and war machine, afraid of the threat I pose."

Next, Tulsi correctly concludes that, from her perspective, the primary really is between her and Hillary. "Don't cowardly hide behind your proxies," she tells Hillary. "Join the race directly."

What a clear and present danger Hitlery would become for the third time!

Russia, Russians, and ANY long serving presidents are claimed to be our eternal enemy thanks to the Demobrats! That's so old and I heard it again this AM on Fox News from a D (grade) House Rep member, state of residency unknown.

Go Tulsi! A democrat and a woman of integrity that seems to still have an adherence to moral and ethical principles. Wow! It has been a long dry spell.

Rep. Tulsi Gabbard (D-HI) is taking the fight to Hillary Clinton and the Democratic Party establishment after a spat Friday in which the party’s 2016 presidential nominee claimed Gabbard was a Russian puppet.

In a video released Sunday on Twitter, Gabbard talks about the origins of her long-simmering feud with Democratic leaders, dating back to her support for the insurgent campaign of Sen. Bernie Sanders (I-VT) in 2016.

Gabbard resigned from her post within the Democratic National Committee (DNC) in protest at the way then-chair Rep. Debbie Wasserman Schultz (D-FL) was treating Sanders. Her concerns were later vindicated by Wikileaks, which released emails showing that party leaders had conspired to help Clinton secure the nomination, forcing Schultz to resign.


In Sunday’s video, Gabbard recalls: “People warned me in 2016 that my endorsement of Bernie Sanders would be the end of my ‘political career.’ They said, ‘Clinton will never forget,’ that ‘she and her rich and powerful friends, her allies in politics and the media, will make sure that you are destroyed.'”

Gabbard then refers to the “countless hit pieces” against her in the mainstream media, the most recent of which was an Oct. 11 article in the New York Times painting Gabbard as a right-wing extremist. (The Times hosted the fourth primary debate just three days later, and the article — which lacked any evidence — was seen by some as an effort to marginalize Gabbard after she had attacked Sen. Kamala Harris (D-CA) effectively in the second debate.)

Hey Doka! Tulsi is stepping down from her seat in Congress to concentrate on her POTUS campaign! That's just

Mrs Clinton just spoke many inspiring biblical comparisons during the late Congressman Cummings' Baltimore funeral with mourners giving much praise for him with a big show of hands.

Next up was N. Pelosi and her speech was inspiring too!

She may yet become Speaker of the House for the third time even though she said this was her last term.

I like the last two speakers, during his eulogy, about the same.

Hillary Denies ‘Lesbian’ Affair, Angers LGBTQ Community
There are none so asleep & oblivious to the real world as those who are & would be Woken.

Have you noticed that the Democrats are finding it harder and harder to contain "Their Own Creations" ?

All Your Base Are Belong To Us

Could be 'cuz playing the identity politics game long enough it gets so eventually, simply showing support for a particular group isn't enough to keep said group happy, a candidate actually has to "live" the part personally.

They say you can't please everyone? Good luck satisfying the diverse & increasingly militant hard-core Democrat 'base'! May the best gender-fluid, minority self-identifying, tree-hugging vegan, anti-gun pro-socialist climate activist Trump-hating candidate win.
There are none so asleep & oblivious to the real world as those who are & would be Woken. 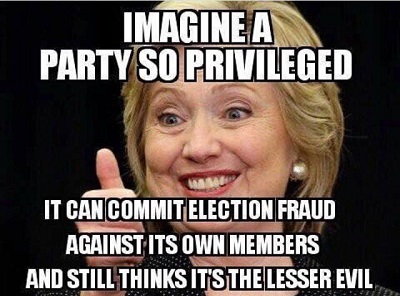 Wonder what she's going to do with the bottom part of her Face?

Hillary showed off her new look last night at a fancy Broadway event with husband, Bill.

It appears as though she’s had some kind of round of botox injections or plastic surgery, as the 72-year-old appeared wrinkle-free through the cheeks and the bags under her eyes are now gone.

Fortunately this wasn’t photoshopped, as several sites are chiming in on this, including Daily Mail, which spoke to a doctor who specializes in “aesthetics”:

Her glowing skin was noticeably smoother and her cheeks more defined than earlier in the week, when she spoke at the Jewish Labor Committee’s Annual Human Rights Awards Dinner in the city on Monday.

Aesthetic expert Dr Ross Perry, founder of www.cosmedics.co.uk, said Hillary has been ‘genetically blessed’ with good skin – but claimed it could also be a result of Botox, injectable dermal fillers and Blepharoplasty.

‘Hilary Clinton looks fantastic and I would suggest this is down to regular tweakments and procedures over the years, which appears less noticeable than having dramatic work done all in one go.

‘Her forehead looks particularly smooth, which would suggest Botox has been administered in the forehead, frown line and around the eye area, as there appears to be minimal crows feet.

‘For someone of 72, I’d expect to see a more furrowed brow with extensive creasing and lines around the eyes.’

Dr Perry added that he suspects Hillary may have had Blepharoplasty, a procedure in which excess skin above the eye is removed.

‘I would suggest she’s also had this to target the under eye bags and to smooth further wrinkles from the corners of her eyes.’

You can verify the authenticity of these images yourself at Wire Image, where the originals were posted by photographer Bruce Glikas.

This is only the latest in Hillary’s strange fashion sense and image saga, which seems to grow more and more twisted every other month.

Some think this is in preparation for her eventual Presidential candidacy in the 2020 race.

What a change for the better. Can the docs redo the gray matter inside too?

Doka, Yesterday I viewed the new look on another web site and my first thought was wtf?

"I Would Love To See His Phone Records"

The sheer gall & projection of this rancid, criminal **** is off the charts-

Hillary Wonders If Trump Spoke To Putin On Day Of Capitol Riot
There are none so asleep & oblivious to the real world as those who are & would be Woken.

"Inside every progressive is a totalitarian screaming to get out." - David Horowitz
Top
Post Reply
686 posts