As The Stomach Turns

Let me see if I have this straight. So, no determination was made as to whether the president committed a crime, Mueller says, yet if the investigation HAD produced clear evidence the president didn't commit a crime, it would've been in his report. HUH??

Sans proof of a crime, OR no, it's all the same, the book was closed. Mueller's wasn't an open-ended investigation. Yet now he's opened the door for Dems to make it so.

Bottom line, how it's supposed to work is you need sufficient evidence OF a crime to bring charges; the way the Dems are twisting this goes against our whole system of justice: Was a crime committed? It doesn't matter. Trump is GUILTY GUILTY GUILTY!!

Proof? We don' need no steenking proof beyond a reasonable doubt for impeachment. All Trump'll need to do is prove he's innocent... Of what? Anything and everything. 'Course, there's still a possibility he could do the right thing once in his life. Resign.

Some folks'll eat all this crap right up. For me all it does is makes me want to puke.
Top

It's a new phase in American History.......Guilty , Until Proven Innocent.
Karma Rules
Top

Depends on who's being accused. Dems are innocent now and forever donchaknow! As for Trump, it looks to me like the Dems want to launch impeachment inquiries and hold hearings but not actually vote to impeach & hand it off to the Senate for a trial -

That way, they & their MSM lapdogs can continue to declare The Donald guilty of any variety & number of undefined crimes until he (1) resigns, (2) loses in 2020 or (3) comes out on top AGAIN, at which point all their heads will explode, like in the movie Kingsman

Riddick
Depends on who's being accused. Dems are innocent now and forever donchaknow! As for Trump, it looks to me like the Dems want to launch impeachment inquiries and hold hearings but not actually vote to impeach & hand it off to the Senate for a trial -

That way, they & their MSM lapdogs can continue to declare The Donald guilty of any variety & number of undefined crimes until he (1) resigns, (2) loses in 2020 or (3) comes out on top AGAIN, at which point all their heads will explode, like in the movie Kingsman


I agree with all you say. As far as impeachment goes, they are the ones walking on the more dangerous ground I believe. We all know how much they hate Trump, but can't as yet find the magic deed to get rid of him,yet. We can believe that Trump has not one hair follicle on him that has not inspected for "Wrong Doing".

Did you happen to see Hannity the other night? He and those that have been inspecting the events and spying
On Trump since way before the election. Laid out pretty much how and who has gotten so dirty trying to over throw America. It's a big list, with the biggest names. It was well worth watching.
Karma Rules
Top The Masters of Deception.


"It's All A Fraud": Deceptive Edits Found In Mueller Report

Rep. Devin Nunes (R-CA) on Saturday called for the immediate release of "all backup and source information" for the Mueller report after internet sleuth @almostjingo (Rosie Memos) discovered that the special counsel's office deceptively edited content which was then cited as evidence of possible obstruction.

"It's all a fraud" tweeted Nunes, replying to a tweet by @JohnWHuber (Undercover Huber), who also posted a comparison between the Mueller report and a newly released transcript of a November 2017 voicemail message left by former Trump lawyer John Dowd, in which he asked former national security adviser Michael Flynn's attorney for a "heads up" if Flynn was planning on saying anything that might damage the president.

Mueller's team omitted key context suggesting that Dowd was trying to strongarm Flynn and possibly obstruct justice by shaping witness testimony, while the actual voicemail reveals that Dowd was careful not to tread into obstruction territory in what was a friendly and routine call between lawyers.

Mueller's deceptive edits beg the question; what else may have been manipulated by the special counsel to make Trump look guilty? When reached for comment by attorney 'Techno Fog' (@Techno_Fog), Dowd said of the edits: "It is unfair and despicable. It was a friendly privileged call between counsel - with NO conflict. I think Flynn got screwed." What "Started" this $25 million "Witch Hunt" ? Mueller and Team Democrats, Do Not want you to know THAT PART! Fusion GPS and Proven , Fake "Christopher Steele Dossier " that Hitlery /DNC bought and paid for!
How you can "Investigate" any thing without the Who, What, Where and Why, is "mind-boggling"

The "Titanic" sunk. And that's ALL YOU NEED TO KNOW!

What an unmitigated disaster.

The nation watches a confused, halting Robert Mueller in what will be the saddest moment in an otherwise stellar career. But without question this Mueller performance clearly illustrated one very important reality.

There is no way in the world the confused, uncertain man testifying today actually ran the investigation he was charged with running. Mueller even had Members saying “over here” to let him know the physical location of his questioner of the moment. At times his aides seated behind him had to point him to his questioner, Mueller’s face a mask of confusion. As the Washington Examiner’s Phil Klein has incredulously noted:

Mueller responded, “I’m not familiar with that.”

How is that even possible? It’s one thing to argue that he isn’t going to answer questions with reference to Fusion GPS (something he did in follow up questions, with the phrase “it’s outside my purview”), but how on earth could he not be familiar with the firm that has played such a key role in the Russia story?

The answer is now appallingly obvious in the performance of a baffled and confused Mueller.

So the reality of the Mueller investigation is now laid bare. This investigation was run by his staff of Trump-hating zealots, led by Andrew Weissmann. The same Weissmann the New York Times described as “Mueller’s Legal Pit Bull.” 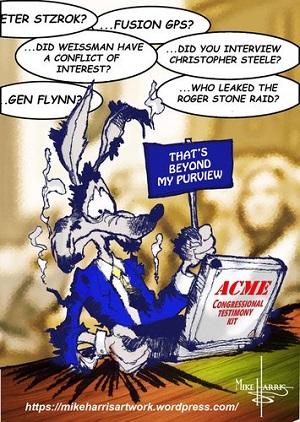