Move along, nothing to see here except an article full of typos, and scraping the bottom of the barrel nonsense.
“For evil to flourish, it only requires good men to do nothing.” Simon Wiesenthal
Top

Leland Keyser (a woman)described by Blasey Ford to be her Very Best Friend! Would Not Purjure herself or be used by Blasey Ford. Nice to see a woman of Character still exits!

A former FBI agent and lifelong friend of Brett Kavanaugh accuser Christine Blasey Ford allegedly pressured a woman to change her statement that she knew nothing about an alleged sexual assault by Kavanaugh in 1982, reports the Wall Street Journal.

Leland Keyser, who Ford claims was at the infamous high school "groping" party, told FBI investigators that mutual friend and retired FBI agent, Monica McLean, warned her that Senate Republicans were going to use her statement to rebut Ford's allegation against Kavanaugh, and that she should at least "clarify" her story to say that she didn't remember the party - not that it had never happened.

McLean's lawyer, David Laufman, categorically denied that his client pressured Keyser, saying in a statement: "Any notion or claim that Ms. McLean pressured Leland Keyser to alter Ms. Keyser’s account of what she recalled concerning the alleged incident between Dr. Ford and Brett Kavanaugh is absolutely false."

Ms. Keyser’s lawyer on Sept. 23 said in a letter to the Senate Judiciary Committee that she had no recollection of attending a party with Judge Kavanaugh, whom she said she didn’t know. That same day, however, she told the Washington Post that she believed Dr. Ford. On Sept. 29, two days after Dr. Ford and the judge testified before the Senate Judiciary Committee, Ms. Keyser’s attorney sent a letter to the panel saying his client wasn’t refuting Dr. Ford’s account and that she believed it but couldn’t corroborate it. -WSJ

Keyser's admission to the FBI - which is subject to perjury laws - may influnce the Senate's upcoming confirmation debates. Senator Bob Corker (R-TN) said that he found the most significant material in the FBI report to be statements from people close to Ford who wanted to corroborate her account and were "sympathetic in wishing they could, but they could not."

Friend of Dr. Ford Felt Pressure to Revisit Statement
At issue is statement to committee that she knew nothing about alleged sexual assault by Brett Kavanaugh.

Danger Danger . DON'T be blind sided. Be prepared for what is more than likely on the way. Being a white male
Is only the 1st part, being a white female is going to be just as dangerous. Skin color is going to be the deciding factor in the Democrat agenda. And it won' matter what "label" you put on your self.


Three Horrible Things We Learned About Liberals From the Kavanaugh Hearings

If someone told you that liberals don’t care about originalism, sticking to the Constitution, or treating conservatives fairly, the surprise level would be zero. Additionally, I’m sure no one was shocked that lefties were howling, being obnoxious, and generally acting like jackasses while they were protesting. These are things everyone on the Right already knows about the Left. However, there are some very new and terrible things we have learned about liberals after watching the way they behaved during the Kavanaugh hearings.

Palo Alto University: ALL SJW, ALL THE TIME

Watch this video and get the background on Christine Blasey Ford and the feminist machine that is Palo Alto.

http://www.youtube.com/watch?v=cFL6k5yOAFM
There are none so asleep & oblivious to the real world as those who are & would be Woken.

Sen. Chuck Grassley (R-Iowa), chairman of the Senate Judiciary Committee, on Friday referred a woman who made false allegations of sexual assault against Brett Kavanaugh to the Department of Justice and the FBI for investigation.

In a letter addressed to Attorney General Jeff Sessions and FBI Director Christopher Wray, Grassley said that Judy Munro-Leighton should be investigated for making materially false statements and for obstruction.

In a telephone conversation with Committee investigators on Thursday, Munro-Leighton confessed that her email claiming to be the "Jane Doe" who accused Kavanaugh of rape was made "to get attention" and was just a "tactic" and a "ploy."

The Judiciary Committee chairman wrote that on Sept. 25, Sen. Kamala Harris (D-Calif.) forwarded a letter from a “Jane Doe” to Committee investigators, claiming that Kavanaugh and a friend had raped her "several times each" in the “backseat of a car.”

...Don't even try robot. You can't make sense out of nonsense.
There are none so asleep & oblivious to the real world as those who are & would be Woken.

Well, This Explains Everything

It all makes sense now 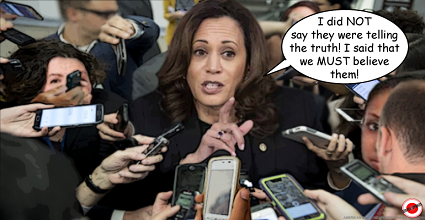 I see the Rag, NYTs has struck again! Of course we all know the "Why" Now!

After Christine Blasey Ford publicly alleged that Brett Kavanaugh tried to rape her, her father repeatedly communicated to Kavanaugh's father that he supported Kavanaugh's confirmation to the Supreme Court.

Last year, when Christine Blasey Ford emerged after then-Supreme Court nominee Brett Kavanaugh’s confirmation hearings to accuse him of attempted rape at a house party when both were teenagers, there were many unanswered questions both about her story and her credibility.

She offered no proof that she and Kavanaugh had ever even met. She couldn’t remember where it happened, when it happened, or how she arrived at or departed from the party. None of the four alleged witnesses she eventually named, including one of her closest lifelong friends, corroborated her accusations. Prior to airing her allegations with the media, she scrubbed her entire social media history that indicated she was a liberal activist.

To this day, there is zero evidence beyond her claims that the alleged assault ever happened. One detail, however, remains particularly intriguing. The Blasey family stayed conspicuously silent about the veracity of her allegations. A public letter of support for Ford that began “As members of Christine Blasey Ford’s family . . .” wasn’t signed by a single blood relative. Reached for comment by the Washington Post, her father simply said, “I think all of the Blasey family would support her. I think her record stands for itself. Her schooling, her jobs and so on,” before hanging up.

Privately, however, it appears the Blasey family had significant doubts about what Ford was trying to accomplish by coming forward and making unsubstantiated allegations against Brett Kavanaugh. Within days of Kavanaugh’s confirmation to the Supreme Court, a fascinating encounter took place. Brett Kavanaugh’s father was approached by Ford’s father at the golf club where they are both members.

Ralph Blasey, Ford’s father, went out of his way to offer to Ed Kavanaugh his support of Brett Kavanaugh’s confirmation to the Supreme Court, according to multiple people familiar with the conversation that took place at Burning Tree Club in Bethesda, Maryland. “I’m glad Brett was confirmed,” Ralph Blasey told Ed Kavanaugh, shaking his hand. Blasey added that the ordeal had been tough for both families.

This crap is Never very far from a "Clinton". Stier, another Clinton, loaded, hired gun.

On Saturday, The New York Times ran a story repeating allegations that Brett Kavanaugh was drunk at a party in college and had his genitals thrust into a woman's face. The allegation has not been confirmed, and friends of the alleged victim say she has no recollection of the events. The man telling the story, Max Stier, represented Bill and Hillary Clinton in the 1990s when Bill Clinton was accused of exposing himself to a woman in a hotel room.

Stier's story appears in the forthcoming book The Education of Brett Kavanaugh: An Investigation by Robin Pogrebin and Kate Kelly. "A classmate, Max Stier, saw Mr. Kavanaugh with his pants down at a different drunken dorm party, where friends pushed his penis into the hand of a female student," the authors wrote in a New York Times article teasing the book.

Interestingly, the alleged victim is not quoted in the article, and neither are any corroborating witnesses. In fact, The Federalist's Mollie Hemingway reported that "the book notes, quietly, that the woman Max Stier named as having been supposedly victimized by Kavanaugh and friends denies any memory of the alleged event."

As for Max Stier, he has a long history with sexual assault claims, but from the other side. Stier, a Democrat, represented President Bill Clinton after Paula Jones accused him of exposing himself to her in a hotel room. Clinton settled with Jones for $850,000 and lost his law license for five years.

Why ? You ask ,for the renewed and frenzied attacks on Kavanaugh? They (Democrats)are just doing " ground work" for the Trump" Impeachment", that if pushed far enough, will more than likely go to the "Surpremes". If Kavanaugh can be "Despenced With" they can be nicely manipulated with a nice tie breaker(Again) by Obamis Boy , John Roberts.

Do the Dems really think no one notices About John Roberts?
KARMA RULES
Top

"Demand Justice" a nice rightious sound to it, right? The trained dogs of hate, feed on this stuff, the more revenge and pain inflicted the better! Mindless Creatures of the Night, jump to any height for the sake of "The Label" until they too are destroyed from within.