So that was something to crow about then - How's that working out for you now, "Quid Pro" Joe? - A 4th place finish in Iowa, maybe the same (OR worse!) coming up in NH?...

Nothing says 'Damaged Goods' like having a monkey on your back AND an albatross around your neck.
"Inside every progressive is a totalitarian screaming to get out." - David Horowitz
Top

BIDEN WORKING ON HIS IMAGE

If you thought life couldn't possibly get more difficult for Joe Biden, after he had to settle for a horrific fourth place in Iowa, I've got quite a surprise for you: yes it could. And the former vice president has no one to blame but himself.

Just watch this video of Biden talking to a voter in New Hampshire who asks him why they should trust he can turn his campaign around. Well, Biden asks the lady who dared asked him this "good question" (his words), "have you ever been to a caucus?" When she answers in the affirmative, he lashes out at her.

"No, you haven't," Biden responds. You're a lying dog-faced pony soldier." In case those present thought he was kidding, he made sure to explain that he was just "being honest."

Biden Suggests Paying Brazil $20 Billion To Not Cut Down Trees
"Inside every progressive is a totalitarian screaming to get out." - David Horowitz
Top

Not to mention the Kookie "I was thrown in jail, when I went to see Mandela" thing. He has either had a total break-down or is being highly paid to continue the chaos (utter confusion)? Probably needs his "Golden Leg Hairs" rubbed

Last night, Biden claimed he negotiated the Paris Climate Accord with a Chinese president who has been dead for 23 years and then told the crowd in South Carolina that he is "running for the United States Senate."


The rigors of the campaign can wear down the most energetic of young men and women.

I once interviewed a U.S. Senate candidate who fell asleep on live radio. Exhaustion happens.

But what's happening to that "lying dog-faced pony soldier," Joe Biden, on the campaign trail is beyond asking a wheelchair-bound man to "stand up, Chuck!" and commenting that 7-11 and Dunkin Donuts workers all have a "slight Indian accent." In fact, this might well be a "big f*ckin' deal" for old Joe.

It may be time to pin a note to his sweater and send him home.

In South Carolina Monday, Biden transported his brain back to before he was vice president for eight years to his campaigns for his long-held Delaware U.S. Senate seat: “I’m Joe Biden, I’m a candidate for the United States Senate. Look me over, if you like what you see, help out. If not, vote for the other Biden.”

Only speculating here. I'm thinking the Dems are in hopes that their loyal voters are too damn dumb to notice that Joe is too Mentally Incompetent to go to the bathroom by himself. I have no doubt that Soros and Obamie, are waiting in the wings to help him out and finish the planned destruction of the United States. They have already proven and fine tuned their Election Tweaking, by manipulating their own elections to rid themselves of Bernie Sanders.

We should NOT give up , yet! They are getting really "Cocky" and "Brazen" , Schumer is practicing his "Dictator Persona" maybe a little early?

Almost three weeks after she went on the record with her sexual-assault allegations against Joe Biden, The New York Times and The Washington Post have issued their own investigative reports on Tara Reade, who briefly worked for Senator Biden on Capitol Hill in 1992 and 1993. The networks are still delaying.

Top editors say hey, we're not "political actors." Come on. You can always demonstrate the media’s political calculations by noticing they’re not based on the evidence as much as they’re based on who is accused. FULL STORY
"Inside every progressive is a totalitarian screaming to get out." - David Horowitz
Top

Big Story Of The Day 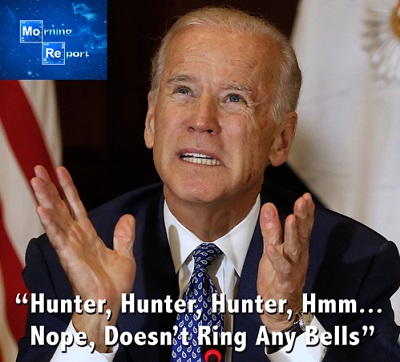 From The Morning Report:

What we have all known for some time but is now out in the open for the Anti-Media to ignore and bury is the Senate report that confirms Hunter Biden is up to his crystal-meth teeth in corruption and foreign influence-peddling with our nation’s rivals and enemies to the tune of multiple millions. And you can bet your sweet ass that his father, the Democrat Party’s 2020 nominee for President of the United States, is really raking it in.

In short, Hunter Biden with the help and no doubt equal or even greater participation of his father, committed felonious acts, some of which imperiled our own foreign policy and national security interests, in exchange for payoffs. In short, they are the ones that committed the acts that President Trump was impeached for.

I don't see how they are ever going to allow "Old Joe" to do any debating on Tues! The drugs and live baby stem cells are NOT working? I watced CNN for about 5 min and they are frothing at the mouth, looking idioic to even their loyal trained Communists." Hate Fests" get just plain boring, like a drunk who repeats themselves continually.

I suppose they could "Bin Lauden" him, quick burial at sea..........ought to take care of things , give them time to get their terrorsts gathered. Exciting times (that I could do without).

What is Wrong with Old Joe? Biden Says He “Got to the Senate 180 Years Ago” (VIDEO)