I'd never seen 'em 1 through 3 just the same as all your great finds of razzing mini posters!

You are good at what you do in the, like razz mattaz pics 'n captions! How do you sus them all out. It's great work ole man!

Gotta leave you with the Wisconsin Hwys eletronic note board; It's the AP News Note of the Week: Nationwide!

"GET YOUR HEAD OUT OF YOUR APPS!"

That was so unique my dedicated few friends! Ooh so unique.

I hope that state employee get's a raise soon.

Heck everyone I'll probably make that line my next safety sign below the hill*. When I remove Buckle Up Click It or Ticket! ISP - GCSD - OPD & on the flip side of the non flashing rusted arrow sign, Buckle Up -Seat Belts Save Lives!

*at the FPD Station 1 next to the fresh dirt excavations for the new Station 1 @ $1.7M

O's Post-Presidency Lifestyle Under Fire From The Left

The Democratic base is growing increasingly frustrated with former President Barack Obama’s actions after leaving office, including a seemingly endless tour of millionaire and billionaire luxury retreats. FULL STORY
Top

April 2016, seems like such a long time ago! Pretty sure it was discussed here, but it is nice to have the facts verified. I don't think even Trump, had a clue how "untouchable" Hitlery and Obami really are. Must have been hard work to find "just the "right" thing to make her outright treasonous actions, NOT come into the light, but big enough to keep her "safe", as well as keeping Obami "safe" all so. Demons are so very clever.

It Wasn't Comey's Decision To Exonerate Hillary - It Was Obama's

Authored by Andrew McCarthy via NationalReview.com,

On the right, the commentariat is in full-throttle outrage over the revelation that former FBI Director Comey began drafting his statement exonerating Hillary Clinton in April 2016 – more than two months before he delivered the statement at his now famous July 5 press conference.

The news appears in a letter written to new FBI Director Christopher Wray by two senior Senate Judiciary Committee Republicans, Chairman Chuck Grassley and Senator Lindsey Graham. Pundits and the Trump administration are shrieking because this indicates the decision to give the Democrats’ nominee a pass was clearly made long before the investigation was over, and even long before key witnesses, including Clinton herself, were interviewed.


The Obama administration was going to follow its leader. What Comey ultimately stated was just a repeat of what Obama was openly saying in April, and what Obama’s Justice Department was leaking to the press in May.

Bottom line: In April, President Obama and his Justice Department adopted a Hillary Clinton defense strategy of concocting a crime no one was claiming Clinton had committed: to wit, transmitting classified information with an intent to harm the United States. With media-Democrat complex help, they peddled the narrative that she could not be convicted absent this “malicious intent,” in a desperate effort to make the publicly known evidence seem weak. Meanwhile, they quietly hamstrung FBI case investigators in order to frustrate the evidence-gathering process. When damning proof nevertheless mounted, the Obama administration dismissed the whole debacle by rewriting the statute (to impose an imaginary intent standard) and by offering absurd rationalizations for not applying the statute as written.

That plan was in place and already being implemented when Director Comey began drafting the “findings” he would announce months later. But it was not Comey’s plan. It was Obama’s plan.

Talk about underwriting your Secretary of State!

And this surprises us how????
What the hell are we fighting for? Ah, just surrender and it won't hurt at all. You just got time to say your prayers. Yeah, while you're waiting for the hammer to fall. (Brian May of Queen)
Top

My My, I was led to believe All of "Wall Street" was made up of all dreadful Republicans! Hillary taught Obama well.


For a man who once criticized the Clinton Foundation for taking millions of dollars in 'donations' from Wall Street "Fat Cats," Obama seems to be in a rush to replicate the lucrative Clinton scam via his very own Obama Foundation. As Bloomberg points out this morning, since leaving office in January, Obama has already collected millions in speaking fees from the same Wall Street banks that may have cost Hillary her shot at the White House.

Last month, just before her book “What Happened” was published, Barack Obama spoke in New York to clients of Northern Trust Corp. for about $400,000, a person familiar with his appearance said.Last week, he reminisced about the White House for Carlyle Group LP, one of the world’s biggest private equity firms, according to two people who were there. Next week, he’ll give a keynote speech at investment bank Cantor Fitzgerald LP’s health-care conference.

Obama is coming to Wall Street less than a year after leaving the White House, following a path that’s well trod and well paid. While he can’t run for president, he continues to be an influential voice in a party torn between celebrating and vilifying corporate power. His new work with banks might suggest which side of the debate he’ll be on and disappoint anyone expecting him to avoid a trap that snared Clinton. Or, as some of his executive friends see it, he’s just a private citizen giving a few paid speeches to other successful people while writing his next book.

“He was the president of the entire United States -- financial services are under that umbrella,” said former UBS Group AG executive Robert Wolf, an early supporter who joined the Obama Foundation board this year. “He doesn’t look at Wall Street like, ‘Oh, these are individuals who don’t want the best for the country.’ He doesn’t stereotype.”

Now all he needs to do is use his foundation to raise money for Hurricane Irma victims in Barbuda, use that money to hire his buddies to rebuild the island and then sit back and wait for the kickbacks to roll in...then the transition to the Clinton Foundation will be complete.

Of course, as Bloomberg also notes, Obama's speeches previously went unreported for some odd reason.  Frankly, we're shocked that these speeches didn't manage to attract the media's attention until now...they must have just missed it.

The Rest of the Story

Re: McCain, Obama, & Shumer as The Three Stooges!

I could not pass this up on line without posting the pic at FF. 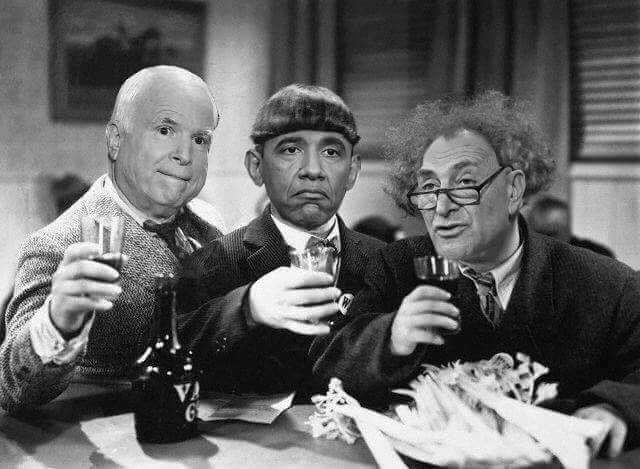 I loved the real Three Stooges just like you do Riddick. Shush! It's a Secret, As per usual He never wanted anyone to know what he Was Really Up To and for the most part....
IT WORKED.!!

They're proud that former President Barack Obama was giving a speech at their get-together, but they didn't want anybody to talk or post on social media about it.

In a bizarre demand, the MIT Sloan Sports Analytics Conference apparently called for attendees of Obama's speech, which took place inside the Boston Convention and Exhibition Center, to keep it a secret.

"The 44th President of the United States, Barack Obama, will address the 2018 Sloan Sports Analytics Conference on February 23, 2018 at the Boston Convention and Exhibition Center," a description of the ESPN-sponsored event says. "A lifelong sports fan and athlete, President Obama will address a wide range of subjects in his talk, from his most memorable moments in the White House, to his post-presidency plans."

But attendees and members of the media were given a policy that requires them not to talk about it.

Doka, The old saying about keeping secrets is, "If you want to keep a secret, you've blown it wide open if you tell it to another human being!"

How well has it been keeping UFO's a secret worked out for Uncle Sam?

Riddick, Legend has it about Wrigley Field's out field wall that there's lots of baseball's hidden inside it's ivy. But there'll be none found searching the pic on the right!

That greenery was reported to be the ivy at Wrigley Field and not poison ivy as some have suggested.