What's THAT all about? Hillary wants us to think the best way to end racism is with even more racism?

And if the answer is 'yes', then my question becomes who's gonna save America from Maxine Waters?
Top

So, What Are We Supposed To Think HERE?

When Hillary Clinton joined Mayor Bill De Blasio on stage at New York City’s annual Inner Circle Dinner, no one expected things to turn racist. But that's exactly what happened when the Democratic duo attempted to tell an ill-advised joke.

QUOTE:
"She should return the money for the ‘love of the Democratic Party’ to the DNC for its use."

Hitlery could care less about the DNC. When you are a "True Narcissist" no one matters but yourself.

Several officials with the Democratic National Committee (DNC) are demanding that Hillary Clinton return over a million dollars that the organization paid her political group for her campaign email list and other resources, reports the Huffington Post's Daniel Marans.

In February 2017, the DNC agreed to pay Clinton’s group Onward Together $1.65 million for her campaign email list, analytics, donor data and related items, The Intercept reported on Wednesday. The cache of material was worth more than $5 million; Clinton’s campaign made an in-kind donation of resources worth $3.5 million, and the DNC paid for the rest.

Now a number of Democratic Party officials, including some state party chairs and DNC members, want Clinton to retroactively donate the campaign materials to the DNC and return the money that the party organ gave Onward Together. -Huffington Post

The DNC paid Onward Together $300,000 in January and $135,000 in every subsequent month, according to Federal Election Commission filings and information provided by the DNC. Thus far, it has transferred $705,000 to Clinton’s group; as of the end of this month, that sum will have increased to $840,000. -Huffington Post

Nancy Worley, chairwoman of Alabama's Democratic Party and 2016 Clinton supporter said “She should return the money for the ‘love of the Democratic Party’ to the DNC for its use."

Is Hillary Wearing A Back Brace? Social media users are convinced Hillary Clinton is sporting a back brace after she was spotted out in New York last week with a strange protrusion coming from under her jacket. FULL STORY
Top

Could it be lined with Kevlar? Hmm! Back stabbers must be prepared you know.

Years from now she'll still be on her world wide 2008 & 2016 sore loser, explanations trail sitting in her wheel chair speaking on "Why I Lost X 2"!

Here she is again in the news now! The Clintons need to get paid. They just have to get paid for all the good they have brought to the Democratic Party over the past couple of years—like a total election defeat and the fracturing of the party. Yet, even with the party reeling from their wounds—wounds Hillary had a hand in inflicting with her shoddy campaign—the lady needs that dough.

On May 24, the Clinton Foundation has a swanky event, where you can have access to the former first family, with prices range from $2,500 to $100,000 for invitations to various events, cocktail parties, and the foundation’s Annual Briefing. Hillary is building her Onward Together PAC, while Bill is about to charter a book tour; he wrote a thriller with James Patterson called “The President Is Missing.”

If you’ve ever seen the film "Killing Them Softly," which details a hitman completing an assignment for the mob, Brad Pitt ends up doing two jobs and wants to be paid accordingly. The film is set during the 2008 election. As Pitt meets with his contractor, Obama is delivering a speech, which is mocked by Pitt.

“America is not a country, it’s just a business. Now, f**king pay me,” he says as the movie closes.

This line, that mindset is very applicable to Mrs. Clinton.

B. J. Clinton, the hubby, should have spoken too to double their take!

They've gone from being a past First Family to America's present Worst Family!

True or False - Yeah! I'm not going to watch it either today or tomorrow!
With 43 pages, and I've read 'em all, I don't remember seeing this video to date, here.

Hitlery is bound to join Nancy Pelo$i in ranting on our POTUS about using the derogatory name for humans as animals. Hell! The libs have forgotten their biological classification of species! We'z animals too in this Kingdom with way too many kings!

Hitlery is bound to join Nancy Pelo$i in ranting on our POTUS about using the derogatory name for humans as animals. Hell! The libs have forgotten their biological classification of species! We'z animals too in this Kingdom with way too many kings! 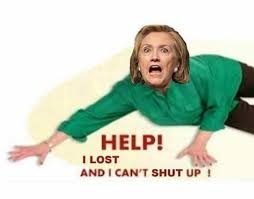 Re: Is Hillary Wearing A Back Brace?

Social media users are convinced Hillary Clinton is sporting a back brace after she was spotted out in New York last week with a strange protrusion coming from under her jacket. FULL STORY

I don't wanna write good ones Riddick, so I will write bad ones!

Now the news today on Michael Savage's web page questions why she's donned a heavy winter coat to speak at her Harvard award show on a 90 + degree May day! It seems her back brace was showing. Heck! Maybe she wears one to keep her upright so as to not fall down in public! Her moment has passed, she was a terrible candidate, and her endless claims of victimhood are tiring rather than inspiring. No one is clamoring for another Clinton run in Hollywood or other leftist hotbeds. They want a new blockbuster, not a sequel to failure.

Yet Hillary is up to something and it's not something we didn’t already know. Onward Together, formed in May of 2017, is a 2020 campaign vehicle in waiting.

Is she really going to make a third run for the White House? The odds are zero that she is playing community organizer just to be a kingmaker. When it comes to money and power, the Clintons assume charity begins at home.

With the Democratic Party locked in battle between its far left and its far, far left wings, no single leader has emerged from the 20 or so Dems in line for a shot at the nomination to unite it. Clinton is trying to play that role by being mother hen to fledgling activists drawn to politics by their hatred of Trump.

If they were active in 2016, most probably supported Bernie Sanders in his primary challenge to Clinton. But by helping to fund them now, she is putting them in her debt for later. Here’s why she can’t be ignored:

First, w;ith no clear front-runner for the nomination, Clinton remains the closest thing to an incumbent. She’s also got numerous advantages, from name recognition to campaign experience to an off-the-shelf Cabinet, that could give her a head start.

Second, a crowded, diverse field diminishes the chances of anyone knocking her off. Recall how Trump outlasted 16 GOP rivals by having a committed core of supporters that grew as the field shrunk. Clinton could be in a similar position — unpopular among many, but also unbeatable by a single opponent.

Third, looking ahead to the 2020 primaries, she sees no reason to fear the favorite daughters and sons in key blue states. And please — forget Sanders and Joe Biden. Sanders is already 76 and Biden, at 75, has never been a viable candidate for president and still isn’t.

Fourth, money is not an issue. Some donors will resist Clinton at first, but any Dem nominee can count on all the money in the world to run against Trump.

To be clear, there are scenarios where Clinton doesn’t run. Health reasons, for example, or a younger rival could rocket to the top of the pack and become the party’s next Barack Obama. Either way, recurring nightmares of two previous defeats would send her back to wandering through the Chappaqua woods.

Does Clinton want to go for it? Doubters should recall the line about pols who get the presidential itch: There are only two cures — election or death. Besides, the third time could be the charm.

Hitlery, does not bother me as much as those who "worshipped" her. And the ones that still do.

Former CIA Officer and whistleblower Kevin Shipp says what Hillary Clinton did with her charity and Uranium One while she was Secretary of State was a crime for the history books.


Shipp explains, “Hillary Clinton used this to launder money in foreign banks so it wasn’t subject to U.S. laws, congressional subpoenas or FOIA demands for the evidence. This was done to launder this money globally into the Clinton Foundation so the U.S. government could not examine it at all.”

Special Prosecutor Robert Mueller was the head of the FBI while the Uranium One deal was being done by Clinton and the Russians. One fifth of U.S. uranium production was bought by the Russians in a deal Clinton pushed and approved. The Clinton Foundation received more than $140 million from some of the same Russian players who were involved with Uranium One. Why didn’t Mueller stop the deal? Shipp says,

“Mueller is either a complete moron, which he is not, or he overlooked the biggest counterterrorism cases in U.S. history. It involved Hillary Clinton, the Clinton Foundation, Uranium One and, of course, the destruction of all the emails and evidence and her secret server, and on and on and on it goes, and he (Mueller) ignored it all.

How did she get away with obvious crime? Shipp says,

Then, you’ve got Peter Strzok protecting her, and now it appears the United Kingdom GCHQ was using NSA information to target Donald Trump and protect Hillary Clinton. You have to ask yourself what kind of power or connections does this woman have to get all of these members of the Deep State, Shadow Government to risk their own criminal penalties to protect her and try to get her elected? That is the Shadow Government. That is the Deep State. That is what is so chilling about this whole thing...


This is deep. This is dark. This is as dark as it gets, and this is the biggest espionage case involving government officials in the history of this country.”

Thanks for that HRC story and link Doka! Writing "just awful" ain't enough!

On the 12th day of Mueller, my witness sent to me,