This Tucker Carlson monologue is a must-see - Especially the part where a black man accosts a white woman on the street demanding she kneel before him & apologize for her white privilege. And... she does!

Who was the oppressor in that situation? That's right -- the White Woman was. Because Shut Up You Racist.

Why did this particular black guy believe he could accost a stranger of another race and demand she demonstrate racial subservience to him?

A lady friend of mine said something like this: "It's not just a black man bullies a white woman and demands she prostrate herself like a servant that's maddening - it's that you can't even say it's wrong, and why. You're supposed to remain silent and through your silence confirm that this is okay."

I've warned about the New Jim Crow - like the Old Jim Crow, filled with rules on how one race must defer to another, and must never talk back to the other and must even now kneel like a supplicant before one race - for a while now.

Four years ago on Evergreen Community State College campus, #Woke minority progressives began imposing race-based rules on whites. Whites could not attend campus on certain days. Whites could not speak when a minority was minoritysplaining to them about Oppression.

Whites even had to fetch things, like a power charger or a bottled water, when a black student needed us. No one really said anything. No one objected.

No one said, "This is just Jim Crow enforced racial subservience with the serial number filed off and the colors reversed. This is un-American and cannot be tolerated." Nah. Everyone was quiet.

Has ignoring metastasizing of "social justice" into increasingly virulent positive racism, and tacit blessing of it by silence, made it "just go away"? No. In fact, racial subservience demands grew in intensity, aggressiveness and ambition.

Expecting whites kneel to apologize for sh-t some other white people did and become steppinfechits for the black superior race: Is this racial justice?

This is exactly what we have allowed -- by refusing, like cowards, to condemn it and state firmly that this shall not be abided -- to become an increasingly mainstream view of how American whites must bow and scrape to any minority who demands to be treated as a Racial Aristocrat.

By the way, once we speed up immigration and give the vote to millions of illegals -- and white people become a minority faster than they would otherwise -- do you imagine demands for whites to subordinate themselves and give deference to other races will suddenly stop, or will it become even more extreme and more foul now that they have more power to impose it?

I say it will become worse -- much worse.

Especially because white liberals are affirmatively stating that yes, whites should be made to be an officially second-class caste, and white "respectable conservatives" are endorsing this view tacitly by refusing to say something "controversial" - like "No race (including the white race) should be made into a subservient lower caste and forced to carry around the collective guilt of every sin committed by a member of that race."

See, that's "controversial" for the "respectable" conservative media because it mentions that maybe whites are subject to racial prejudice and hatred and the respectable conservatives' liberal friends have all declared that it is racist to suggest that whites could be the victims of racism.

Equality has NEVER been the goal. DOMINATION is the name of the game. Too bad these folks, don't know they just are "Useful Idiots"

Democrats............Speak many forks Tongues. Just wait to see what they have planned for YOU!

We had to fight a Civil War with the Southern Democtats, but we won! The Emancipation Proclmation was signed Jan 1st, 1863 by Lincoln, the 13th Amendment to be added to our Constitution, In January of 1865, The Democrats Fought It with everything they had, Slaves were Status. In the mean Time Lincoln was Assasinated, April 15th, 1865, by a DEMOCRAT ACTOR.

In 1963 we had Alabama, Dixicrat (Democrat)Gov George Wallace on winning the Gov-Ship said in his inaugural speech,

In the name of the greatest people that have ever trod this earth, I draw the line in the dust and toss the gauntlet before the feet of tyranny, and I say segregation now, segregation tomorrow, segregation forever.

The Students DID get in with the help of President Johnson and Escourted by the National Guard.

In the early 1940s, Byrd recruited 150 of his friends and associates to create a new chapter of the Ku Klux Klan in Sophia, West Virginia.

I shall never fight in the armed forces with a negro by my side ... Rather I should die a thousand times, and see Old Glory trampled in the dirt never to rise again, than to see this beloved land of ours become degraded by race mongrels, a throwback to the blackest specimen from the wilds.
— Robert C. Byrd, in a letter to Sen. Theodore Bilbo (D-MS), 1944

Byrd was a member of the wing of the Democratic Party that opposed federally-mandated desegregation and civil rights.

He Died in office in 2010. He is still missed by the Democrats.

That's 14 Trillon , folks. That's $350,767.00 for every black person in the United States! Who is going to pay it? Why, the Tax Payers are, you know.....those guilty slave owners. WHAT NO SLAVE OWNERS? Well, That just doesn't
Matter.....there are no Slaves either.


BET co-founder calls for $14T in reparations for black Americans What does any of this history have to do with today's racism? Wall to wall sweet f*ck all.
“For evil to flourish, it only requires good men to do nothing.” Simon Wiesenthal
Top 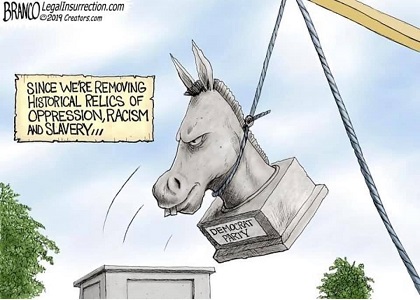 This Tucker Carlson monologue is a must-see - Especially the part where a black man accosts a white woman on the street demanding she kneel before him & apologize for her white privilege. And... she does!

And these incidents are rampant right across America? You cherry pick one lone incident and imply that this is the norm. What an idiot you are Riddick!

Removal of the Democrats would be a very good start for the equality of the human race. For those too dumb to understand, that includes All Skin Colors. These Demogods/Democrats(inferior deities), take delight in piting one against the other not because they "Care" about anything or anyone, of any color of skin! They pick at sores until they become infected, for their own "Agenda" . POWER OVER HUMAN KIND, Slavery for all!

I am seeing something beginning to happen, just a glint. I hear sucessful leaders of color getting just as fed up of these Marxist Democrat Liberals. They have caught on to what the "White Trash" liberals are doing to their people , using them like attack Dogs of war and suppression. I for one, am sick to death of it!!
Perhaps just perhaps it will bring peoples of all skin colors , closer to being ALL part of the Human Race, for betterment of all of our lives. Sometimes peoples are brought Together by having a "Enemy in Common"..
Karma Rules
Top

USA Today Pretends Democrats Didn’t Found the KKK, Start Civil War (They Did)
Apparently, if you don’t like certain facts, you can just declare them false. No wonder many Americans dismiss liberal media "fact checks" as nothing more than Democratic Party propaganda. FULL STORY
Top
Post Reply
8 posts • Page 1 of 1