THIS IS ONLY ONE OF THE WAYS FOR YOUR PLANNED DESTRUCTION.

The Biden administration has canceled one of the most high-profile oil and gas lease sales which was pending before the Department of the Interior, at a time when Americans are suffering from record-high prices at the pump.

The DOI's reasoning? A "lack of industry interest in leasing in the area" of more than 1 million acres in the Cook Inlet in Alaska. What's more, the department also halted two leases under consideration in the Gulf of Mexico due to "conflicting court rulings that impacted work on these proposed lease sales," according to CBS News.

"The Department also will not move forward with lease sales 259 and 261 in the Gulf of Mexico region, as a result of delays due to factors including conflicting court rulings that impacted work on these proposed lease sales," said an agency spokesperson.

Federal law requires DOI to stick to a five-year leasing plan for auctioning offshore leases. The department had until the end fo the current five-year plan – due to expire on June 30 – to complete the sales.

Within his first week in office, President Biden signed an executive order temporarily suspending new oil and gas leases on federal lands. The administration resumed the new leasing last month following court challenges against the ban. The administration is appealing a ruling in which Judge James Cain, a Trump appointee, struck down the ban. -Fox Business

"In Alaska, the problem was that the greens scared off virtually everyone," he said. "It's expensive to explore and drill, and the greens made it pretty clear, they were going to make it even more difficult."

In Brandon We Trust

Biden talks tough on inflation, & on how his energy & spending polices had/have nothing to do with rising prices. He wants you to believe he cares, when he truly does not. If he cared he'd stop the all-around damage he continues to inflict - 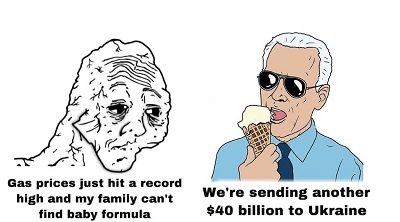 Don't worry, be happy folks! We don' need no steeking fossil fuels! All we need is solar, wind & magical thinking. And if parents can't find formula, then let the babies eat ice cream. And all will be well long as Zelensky gets what he wants.

The trouble isn't Biden & his policies, it's the malcontents that don't know how great they have it, & how much greater it'd be if they'd all just stop complaining. Inflation, shortages, war, it's all for the greater good. Keep it coming, Brandon!
"When the rock of green and woke ideology hits the hard place of reality, sheer madness always results." - Victor Davis Hanson

“Don't take life too seriously, you'll never get out of it alive!” - Bugs Bunny
Top

Bite-me put a hold on baby formula manufactering, like every shotage we have has been manipulated to be so.

By the way , they have found pallets of the stuff, , But have to cross our border to get it, Free, with your new phone, free health care and a free place to live. So you can enjoy your free food.
KARMA RULES
Top

Biden lied to you, everything has gotten worse, your life has gotten harder, and the Democrats are to blame for it.