The tally of classic Turkey Day foods – enough to feed 10 people, plus leftovers – is $48.90 on average, down 22 cents from last year’s average, according to the American Farm Bureau Federation’s 33rd annual survey.

The star of the Thanksgiving feast is the turkey, and the average cost this year for a 16-pounder is $21.71 or about $1.36 a pound, down from $22.38 in 2017. The Farm Bureau found that Thanksgiving retail turkey prices are the lowest since 2014. FULL STORY
There are none so asleep & oblivious to the real world as those who are & would be Woken.

This Year's Thanksgiving Feast Will Wallop The Wallet 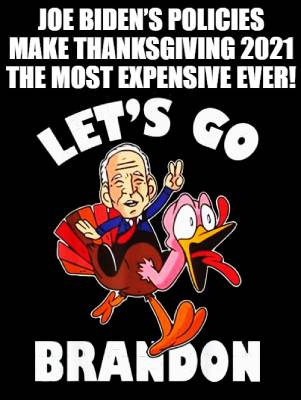 Thank The Government For The High Price Of Holiday Meals

As we head into the holidays, part of the season's cheer will be tarnished by the higher cost for festivities. In fact, food, like many goods and services, is costing more as the flood of dollars unleashed by the federal government diminishes their value, ensuring money doesn't go as far as it once did.

With Thanksgiving looming, a relatively easy comparison is made in the price of a turkey dinner with all the trimmings compared to the same feast in 2020. 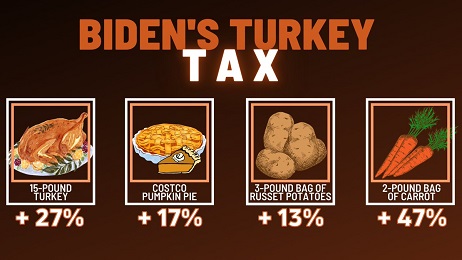 With inflation running at an annual rate of 6.2 percent, according to Bureau of Labor Statistics figures, food prices are up overall by 5.3 percent, with meat, fish, eggs, and poultry (that Thanksgiving turkey being the obvious example) up by a painful 10.5 percent. How about a festive bowl of baked beans, everybody!

In theory, higher wages could off-set higher prices if they moved in lockstep, but they don't. Some members of the media attribute inflation to pressure to pay higher wages to attract workers yet, in fact "real average hourly earnings decreased 1.2%, seasonally adjusted, from October 2020 to October 2021," according to the Bureau of Labor Statistics. So, that's not behind the price increases. What's going on?

"The US Federal Reserve and Treasury have printed trillions of new dollars and sent checks to just about every American," comments Hoover Institution economist John Cochrane. "Inflation should not have been terribly hard to foresee; and yet it has caught the Fed completely by surprise."

"I think they're just not recognizing just how much demand is being created by the tremendous wall of money - 15 percent of GDP - in one year that they released last spring," agrees Larry Summers, director of the National Economic Council under President Obama, about the Biden administration's massive spending.

Compounding the flood of cheap money is a supply chain broken by a series of government interventions since the beginning of the pandemic, on top of the usual perils posed by nature and accidents. Pandemic lockdowns, bureaucratic hiccups, inflexible rules, and tariffs disrupted production, shifted consumers' needs, and interfered with transportation, making it difficult for sellers to satisfy demand.

Transportation woes may actually worsen with U.S. energy prices up 30 percent, and that means higher costs for, among other things, stocking supermarket shelves.

As poorly as that bodes for food prices, as an American if you're looking for a relative bright spot, count yourself lucky because it's worse for people who live much closer to the edge: Around the world, people generally far less prosperous than those in our own country are paying almost one third more for their meals than they did a year ago. That's a lot more dough for a lot less bread.

Soaring prices in less-prosperous places are potentially catastrophic. "There was a dramatic worsening of world hunger in 2020," the World Health Organization (WHO) warned in July, stating "in many parts of the world, the pandemic has triggered brutal recessions and jeopardized access to food."

While some price elevations predate the pandemic, "early lockdown measures and supply chain disruptions induced a spike in consumer food prices," observes the International Monetary Fund (IMF), which also points to "soaring shipping and transport costs" which themselves largely result from ill-considered interventions.

As you plan your menu and adjust your budget for the holidays and beyond, you can thank government policymakers for the high prices you pay and the items you do without. But be somewhat thankful our country still enjoys enough prosperity to insulate us from the worst outcomes of incompetent political meddling in the marketplace. Elsewhere, people are literally going hungry for the same reasons.

Killing Us Economically, not so softly, according to China Joe it's because we are all rolling in the big bucks and it's our fault we demand so many goods, of course he doesn't mention , deliberately , cutting off "Supplies", food, heating, etc. For the" Bobble Heads" it is a lesson, that," See, we told you Capitalism is Bad!" But, We are going to make it wonderful for you now! We will take care of you! BREWHAHA! Biden says jobs creation galore , but only if you go for the needle, and No you do not Need to know what's in the needle, just take and shut- up!

1 A theoretical economic system characterized by the collective ownership of property and by the organization of labor for the common advantage of all members.

2. A system of government in which the state plans and controls the economy and a single, often authoritarian party holds power, claiming to make progress toward a higher social order in which all goods are equally shared by the people.

3. The Marxist-Leninist doctrine advocating revolution to overthrow the capitalist system and establish a dictatorship of the proletariat that will eventually evolve into a perfectly egalitarian and communal society.

It will only be perfect and equal when we all have nothing left to share. EQUALITY IN POVERITY. Sharing in "Nothingness" and you will be so happy that the illegals have 450 thousand $ of your money and property that was once yours.
KARMA RULES
Top
Post Reply
3 posts • Page 1 of 1