From the Far East ~ Art Bell!

I was listening to one of Art's old broadcasts, and he mentioned this old show of his from his pre-Coast 2 Coast days.

Does anyone know if there are copies of these out there anywhere?
Top

I've never heard an Art Bell recording that predates C2C.
For if it profit, none dare call it Treason.
Top

Thanks Squidink. I have some files from an old FF link - Dreamland shows, but I heard reference to this particular show the other day while listening to an old show from 1999 and it got me thinking. I guess that this might have been something he did between Dreamland and C2C.
Top

Excerpted from Deja Vu All Over Again for UFOs and Bigelow at mysteriousuniverse.com:

[Billionaire Las Vegas businessman Robert] Bigelow has had quite a flirtation with the Offbeat, but it’s a romance that never seems to make it to the altar.

In 1993, he started a radio program on the paranormal called Area 2000 with Art Bell, George Knapp and Linda Moulton Howe, but cut off funding after the first year because he didn’t think they’d be able to continue attracting quality guests.
...
One person who had a early glimpse of Bigelow’s anomalous career is Dr. Angela Thompson Smith. She has written about her experience at the Bigelow Foundation in 1992 after she was hired as a liaison between the PEAR Institute at Princeton and the Bigelow Foundation. She ended up moving to Nevada and was on hand at the inception of many of the Bigelow projects discussed in this article.

Not long after arriving in Las Vegas and starting to work for Bigelow, Angela had received the assignment to realized Bigelow's vision for the weekly radio program, and Art Bell would be the host. The show would air for two hours each Sunday night, and be called Area 2000. A local news reporter named George Knapp and a woman named Linda Moulton Howe - known better today as a writer and documentarist in UFO and related esoteric subjects - were hired to read news reports on the program, and Bell did the interviewing.

Angela's job was to seek out news stories and recruit guests for the show. Richard Hoagland, who made a name for himself writing books and giving interviews about the "Face on Mars," was one of the early guests on the show, along with UFOlogist Bud Hopkins, and others. John Alexander, the colonel who had introduced INSCOM's General Bert Stubblebine to "spoon-bending," was Art's first guest.

Bigelow eventually ended his sponsorship, but Art Bell's little show had become so popular that Bell decided to continue it himself, syndicating it out of his double-wide trailer in the tiny, former cotton-growing town of Pahrump, Nevada, seventy miles outside of Vegas.

Excerpted from the preface to "The Source" by Art Bell and Brad Steiger (1999):

Art Bell and Brad Steiger each command their own respective spheres of expertise, exploring the strange, the unusual, and the unknown.

For Art, it started with a radio show called Area 2000 on KDWN in Las Vegas. Addressing issues that arose as humanity neared the turn of the century, this program gave Art the opportunity to explore two issues he has always been most interested in: the existence of life after death and the possibility of intelligent life in the universe. His own unusual experiences (a precognitive experience and UFO sightings) compelled him even more adamantly towards answers to these issues.

Area 2000 was later replaced by the now very popular show Dreamland, originating when Art and Chancellor Broadcasting teamed to do his show Coast to Coast A.M. Dreamland was essentially the same as Area 2000, but benefited from being nationally syndicated.

As Art says, Dreamland is "a program dedicated to an examination of areas of the human experience not easily or neatly put in a box, things seen at the edge of vision, awakening a part of the mind as not yet mapped, and yet things every bit as real as the air we breathe but don't see."

Thanks Riddick for the find. So, my chronology was screwed-up some, but I appreciate your digging. The C2C show I referenced did mention Bigelow in the conversation, and last year I received a number of e-mails from some MUFON members who were upset with the upper management at MUFON for giving Bigelow unfettered access to all their files, and wanted the leadership tossed.

Thanks again Riddick for the checking.
Top

kbot wrote: The C2C show I referenced did mention Bigelow in the conversation, and last year I received a number of e-mails from some MUFON members who were upset with the upper management at MUFON for giving Bigelow unfettered access to all their files, and wanted the leadership tossed. 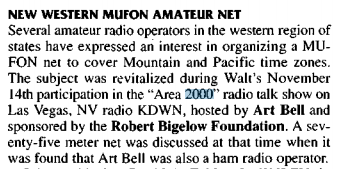 Interesting Riddick, thanks. Been searching the web and haven't found any shows so far.....
Top

kbot wrote: Been searching the web and haven't found any shows so far.....

Odds are this offer is fairly ancient (he says he only produces tape dubs) but if anyone's interested in pursuing it, from what-all I've (not) seen in my searches it looks to be the best lead out there --!!

"Email Ian at: [email protected] if you want to make a deal.
...
Art Bell UFO shows -Large list of Art's old UFO show, Area 2000 which he did before he got big, also some of Dreamland and Coast to Coast. Email if interested."
Top

Yeah, looks fairly old Riddick. Did give it a shot using different search engines and they all bounced. Thanks for the persistence though. Much appreciated.
Top
Post Reply
9 posts • Page 1 of 1