Gardening and Household tips. Good food. The Lighter side...

Anthony Weiner may be lagging in the race for New York City mayor, but he is winning in another area — hot dog marketing.
Link
Top

Pure genius.
For if it profit, none dare call it Treason.
Top

Yes and my first thought was why didn't I think of that?????

Although I think one would have to go a long way to beat Hebrew National but that isn't the point - is it.

A man's character is his fate
Top

The exact parameters of the investigation remain unclear, but officials said that investigators are interested in a report from DailyMail.com that Weiner chatted with a 15-year-old girl for some months last year. The website reported that the girl had told Weiner she was in high school, and he once commented on her youth.

A New York Police Department spokeswoman said: “We are looking into it. We’re just looking into the situation.” A spokeswoman for U.S. attorney Jill Westmoreland Rose in the Western District of North Carolina said that office was “reviewing all materials relevant to the matter.”

Weiner is no stranger to so-called “sexting” scandals. The 15-year-old at the center of the most recent exchange told DailyMail.com that her relationship with Weiner began last January, and the former congressman knew she was underage. She provided the website copies of some of the images and messages she and Weiner exchanged.

Weiner's wife, longtime Hillary Clinton aide Huma Abedin announced last month she was separating from her husband, following a report in the New York Post about another sexting episode with a woman. That report was particularly memorable for an image Weiner apparently sent to the woman while his son lay in bed next to him.

How's This For A Marketing Jingle?

As part of the plea agreement, he must surrender his iPhone and register as a sex offender. Weiner agreed to serve 21 to 27 months in prison but he will be released on $150,000 bond. His sentencing is scheduled for Sept. 8.

Weiner admitted to sharing explicit images with the 15-year-old and encouraging her to engage in sexually explicit conduct; he said he knew his behavior was "as morally wrong as it was unlawful."

Weiner said last fall is when he "came to grips for the first time with the depths of my sickness" and entered "intensive treatment."

"I have a sickness," Weiner said, "but I do not have an excuse." Weiner also apologized to the teenage girl. FULL STORY 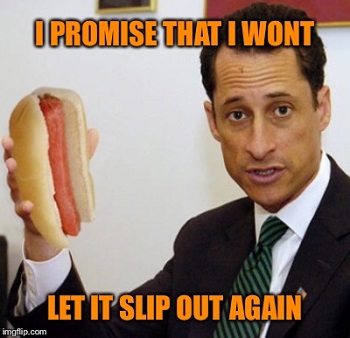