by Riddick
The mainstream media is thoroughly evil. FULL STORY

by Riddick
The liar list includes ESPN’s Jalen Rose, ABC’s Terry Moran, Harvard Law Professor Ronald Sullivan and CNN’s Jake Tapper. The media's lies are both intentional and pernicious. They spread like wildfire, and they are specifically meant to gin up racial hatred against white people. FULL STORY

by Doka
Kind of like all those floating guns and knives, doing bad deeds on their own............ 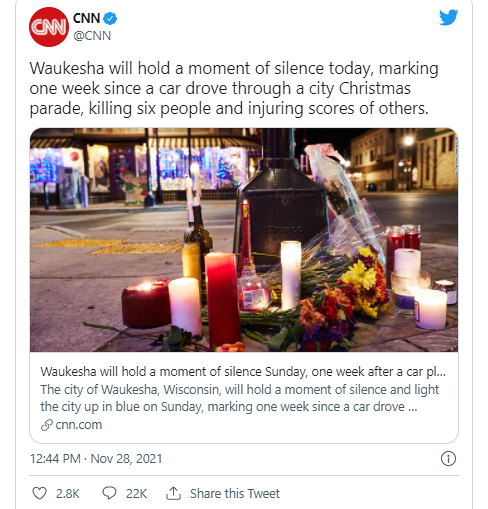 A Tale of Two Cities: Kenosha Vs. Waukesha

About 50 miles apart by car, the violence in Kenosha and Waukesha made national news. Yet in contradictory ways, both reflected the common themes of America’s current legal, media, and societal corruption.

The August 2020 shootings in Kenosha were immediately declared to be “racial.” Yet both the shooter Kyle Rittenhouse and all of his attackers who were wounded or killed were white (a fourth assailant, an African-American who kicked Rittenhouse while he was on the ground escaped without injury).

Shortly after the shootings, the media, Joe Biden, and most of the left-wing commentariat claimed Rittenhouse was a “white supremacist,” despite no evidence of such a libel, then or now. What followed in the media was the most egregious example of concocted fictions since the Russian collusion hoax.

The Left strained to gin up the theme of white-on-white violence as an example of racism to send a message to middle America: no American, in times of riot, arson, and looting, should have the right to use firearms to protect property. And under no circumstances could a citizen use a gun to ward off those intending to maim or kill him. Had Rittenhouse been found guilty, there no longer would be recourse for citizens living in cities where criminals were freely given the streets.

Not long after Rittenhouse was acquitted, Darrell Brooks, Jr., an African-American with a 20-year record of serious felonies, allegedly drove his car deliberately into a Christmas parade in Waukesha, killing 6 innocents and injuring over 60.

Unlike the dishonest media reaction lying about Rittenhouse, who had no criminal record, there was initial careful restraint not to identify the career criminal Brooks as the murderous driver who weaponized his vehicle against parade-goers.

Finally, the news settled into the present narrative of a “car crash,”—as if a driverless vehicle on autopilot simply bumped into various people in the street—before burying the murders altogether on their back pages and dropping the crime from the evening news. Or as the Washington Post put it, “Here’s what we know so far on the sequence of events that led to the Waukesha tragedy caused by a SUV.”

At the time he was mowing down strangers, he had five open arrest charges, including two felonies. Brooks had been released on $1,000 bail just days earlier, in another eerie “coincidence” after being arrested for attempting to run over a woman and her child—the same M.O. reified at the Waukesha Christmas slaughter.

Brooks posed on social media as an incompetent but narcissistic rapper. He left a video trail not just of his mediocre recordings, but of clear evidence of virulent anti-Semitism & anti-white racism, “So when we start bakk knokkin white people TF out ion wanna hear it…the old white ppl 2, KNOKK DEM TF OUT!! PERIOD.”

As pundits strained to deny any connection between the climate of BLM anger over the Rittenhouse verdict and Brooks’ murders, Brooks’ own testimonies point to a connection, at least in the sense of hating people on the basis of their race.

Indeed, regional Milwaukee BLM activist Vaun Mayes quickly alleged the Rittenhouse acquittal had earned the homicidal payback. Or as Mayes elaborated: Brooks was an insurrectionist whose violence has jumpstarted a supposed “revolution,” his apparent euphemism for mass murder.

Brooks is, for a while, in jail. Yet for some crazy reason he can be freed on a $5 million bond. He awaits charges of mass homicide—although one never quite knows. Milwaukee County DA John Chisolm is a controversial “reformer,” whose campaigns have been funded in part by the George Soros conglomerate.

So, what are we left with from these horrors of two cities? In Kenosha the media and the Left ginned up race when there was no such component in the trial. But in Waukesha they perpetuated racial arson and smothered the truth.

That is, they kept largely silent when there clearly was racial hatred—given Brooks’ own record of anti-white and anti-Semitic venom. Again, the media can turn from creation to suppression on a dime, given the common theme of ginning up racial strife and hatred.

An amoral media and Left, so far, have kept an inconvenient Waukesha “car crash” out of the mainstream news—reversing their wild sensational obsessions with Kenosha. After all, in their unhinged racialized worldview, the demonization of a 17-year-old white male, who shot three other white males, still could be squeezed for racial juice, given the larger contextual landscape of a riot over a police wounding of an African-American male.

The shooting of Jacob Blake that set off the Kenosha riots was later determined to be justified, given the armed suspect was heading toward his car, after fighting with police, who were called to the residence to protect a woman who had a restraining order against the career violent felon.

In sum, Rittenhouse had no criminal record; all four of his assailants had lengthy arrest records. Three of them were ex-felons. He had no record of the racial hatred of which he was accused.

In contrast, Brooks was an abject violent racist whom the media sought to shield. And he was a career felon, who both long ago and quite recently should have been kept behind bars so that he would not murder innocents.

Rittenhouse should have never been charged; Brooks should not have been out of jail. The effort to make the former a beneficiary of white supremacy and the latter a victim of it required a level of amoral media deceit that finally was unsustainable even in this bankrupt age.
All times are UTC-05:00
Page 1 of 1