Welcome To The Babylon Bee

WASHINGTON, D.C.—The story of President Trump's miraculous healing from the deadly China Virus has spread all across the nation. This led one woman, in her desperation, to seek out the president after all her doctors had failed to heal her of her deadly COVID ailment.

“If I could just touch even the fringe of the president’s suit jacket, then I know I would be instantly healed.”

The woman hid in the bushes behind the White House in hopes that she might get close enough to Trump. As the president was leaving the helicopter and walking to the White House, the woman reached out and just barely touched the president’s outer garment. Immediately, the coronavirus left her completely. It was almost like "a cleaning" and it did a tremendous number on her lungs.

Trump turned and asked the crowd who had touched him as he felt raw MAGA energy leave him, powerful like never before.

The woman came forward and declared in the presence of all the Trump supporters why she had touched him, and how she had been immediately healed.

Several days later, the woman is reporting all symptoms of the virus have vanished. Unfortunately, her skin now has an odd orange tint. "Really really fantastic," she said, making large gestures with her hands. "Incredible health, smart brain, great immune system. Feeling better than I did 20 years ago. Thank you very much."

Fox News Doubles Down, Preemptively Calls Arizona For Biden In 2024

"I don't know -- it just seems like they might have jumped the gun here," said one viewer. "I'm starting to wonder if there might be some kind of bias in the corporate press. I can't quite put my finger on why I feel that way, or which direction the media might be leaning, but I dunno. I just have a bad feeling about this." FULL STORY

"Oh man -- this isn't good," said Seth Meyers as news broke that Biden would probably win the election. "We put all our eggs in one basket: orange man bad jokes! And now that's all gone! What if I go out there and slip on a banana peel? Has that been done before?" FULL STORY

"I just have a bad feeling about this." FULL STORY

He or she ain't alone thinking that.

Now it's "climate chains" credited to Mark Landman early last week on Coast to Coast AM hosted by George Noory.

MK II ∆=
.......all wasteful, climate changing wars. Begun again by the Red Blooded Royals, or by a bewitching god-like dictator, or any so called religion, or for any other reasons like a world wide virus pandemic! MK 4/26/15

Party Of Love And Progress Rejoices Over Death Of Political Opponent

Unfortunately for progressives everywhere, Limbaugh has announced he will continue broadcasting from the afterlife. FULL STORY

Mr. Potato Head, Gina Carano, Kermit the Frog, Pepe Le Pew and The Land-O-Lakes Lady finally fight back against cancel culture and tell their side of the story! Oh... and Andrew Cuomo too.
Top

All New Ways To Be Racist!

A young Klansman brings some new, progressive ideas to the KKK's table.

"This dangerous 'critical thinking theory' must be stopped," said Governor Newsom sternly as he signed the ban into law. FULL STORY

Whoa! "Luckily for Newsom and California school teachers, studies have shown that critical thinking hasn't really been taught in public schools in the past 50 years in the first place."

Their collective thinking minds are bonkers.

.......all wasteful, climate changing wars. Begun again by the Red Blooded Royals, or by a bewitching god-like dictator, or any so called religion, or for any other reasons like a world wide virus pandemic! MK 4/26/15 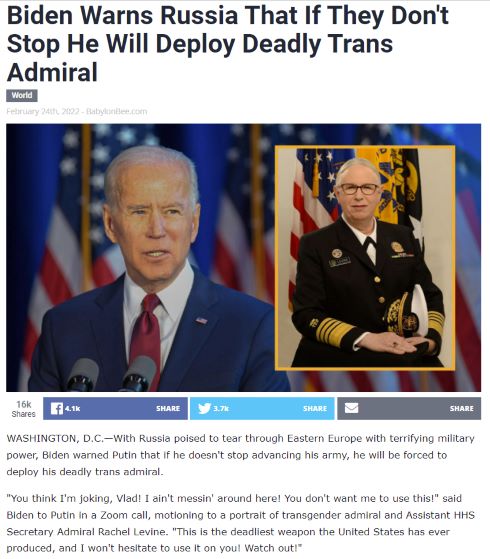 That's our government always thinking from the Bottom-Down, They say crap floats and we awash in floating sh#$t. Raising pitiful unqualified people to the Top is popular. After all he found Doctors who kill for the cause.
KARMA RULES

Seth Dillon, CEO of the popular and hilarious satire site The Babylon Bee, recently spoke at the Freedom Center's Wednesday Morning Club in Los Angeles on May 17, 2022. He explains how the world has become too absurd to be satirized, making his job of trying to parody reality a difficult one.