Oregon Governor Kate, Yet Again Craps On Her People

Re: Oregon Governor Kate, Yet Again Craps On Her People

Pretty sure the guy in the plaid shirt is her husband, the other 2 are Oregon State Police, for her security, What a waste of Tax Payer Money! As she is gung-ho to get Rid of the Police Protection for her suffering citizens.

Something like 87 days She has let her hired terrorists , do a whole lot of burning burning and killing in Portland, she is beyond , Evil. Like the rest of the "Flying Monkeys".

Oregon Governor Kate Brown (D-Portland) and her security detail appear to have violated Brown’s own mask mandate, according to a post that has gone viral on Facebook. In addition, a member of that security detail, an Oregon state trooper, has yet to be publicly recognized for rescuing a teenage girl from drowning. A witness to the incident last Sunday is now demanding that the trooper be awarded a medal from the Oregon State Police, but so far Brown has not publicly acknowledged the heroic act by the police officer.

In an interview with PJ Media, the witness, a woman named Rebekah (she asked us not to include her last name out of fear of retaliation from Gov. Brown) described the scene. Rebekah brought her kids to a riverside park on a hot summer day to go swimming. She happened upon Kate Brown and her Oregon State Police security detail on a trail next to the park in Marion County. None were wearing masks, despite a mid-July executive order requiring masks outdoors, not just inside public buildings.

We had just gotten there. We hadn’t even put our stuff down on the ground. As we walk down the trail a guy was screaming, “help help, do you have a rope?” My friend went to grab a stick and this girl was drowning. All I thought was, “Oh my God, I’m not going to let these kids watch somebody die today, right?” I gathered them up and I ran them up to the trail and I ran to go get help because the teenager that was drowning was three times my size. So I gathered up all the kids and we ran right up the trail. Well, the first people that we came across was a group of six people and I said, “Help, somebody’s drowning. Somebody’s drowning, run run!” And these two men jet past me and ran down to the water. Then this lady who I’m standing next to on the trail says, “Don’t worry, they are two state troopers.” And I said, “Oh, praise God. Thank the Lord!” And so I ran back down knowing that he knew what he was doing.

The Rest of The Story/Picture/Comments

Re: Oregon Governor Kate, Yet Again Craps On Her People

This would so funny, if it were not so deadly........Kate, wants
the Sheriff's to come and help HER, as she defunds ALL Law and Order Types!

Ya say your house is being robbed and your wife is being raped...........Call a"Social Worker" get on the schudule!

REVOLT! Oregon Sheriffs Defy Order by Liberal Governor to Send Deputies to Portland to be Attacked by Protesters and Harassed by the Courts!

Governor Brown and Portland Mayor Ted Wheeler have repeatedly denied offers from President Trump to send in the National Guard to solve the problem in a few hours. They would rather see the city completely destroyed before they take the president up on his offer. They are committed US progressives — crazy, arrogant and very, very dangerous.

The governor made the request after a Trump supporter was gunned down in cold blood on Saturday night by a far left antifa activist.

Clackamas County Sheriff Craig Roberts said the governor did not even bother to call him. He will not be sending his deputies into the progressive cesspool.

Sheriff Pat Garrett from Washington County said he will not be sending his deputies to Portland.

Re: Meanwhile, In Michigan...

HA! Guess Gretchen got the message.

No doubt weighing heavily in her decision was having the DOJ's "interest" hanging over her head; that kind of thing can put a big crimp in getting the Dem veep spot!

That was then, this is now: Governor Gretchen is back in brutal form & then some, imposing her ever-more totalitarian will on her state's populace. Too much is never enough, evidently 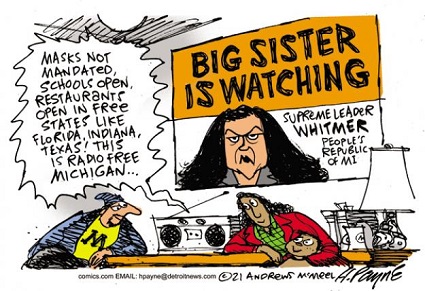 Even after her Draconian shutdown & ongoing restrictions on public life, Michigan’s case numbers are the highest in the nation. Health bureaucrats and other so-called experts are already using the news to set the stage to ramp up lockdown measures further. FULL STORY
There are none so asleep & oblivious to the real world as those who are & would be Woken.

"Inside every progressive is a totalitarian screaming to get out." - David Horowitz
Top
Post Reply
18 posts