A 1 Trillion Dollar Coin? WTHeck! Is this an attempt to save Uncle Sam B id en's 2021 budget?

Weird and unusual, whacked out news!

A 1 Trillion Dollar Coin? WTHeck! Is this an attempt to save Uncle Sam B id en's 2021 budget?

This idea is weird! But it's kind'a too brief but interesting never the less.

Only our nations crazy proponents of AOC's Green New Deal would approve this "easy out"! Maybe they will en masse.

LIBERTY
IN GOD WE TRUST
Year

Last edited by Malaria_Kidd II on 10-18-2021 11:01 PM, edited 2 times in total.
..all wasteful, climate⚛changing wars. Begun again by the Red Blooded Royals, by a bewitching god-like dictator/president or any so called religion, or for any other reasons like a world wide virus pandemic! MK 4/26/15

Re: A 1 Trillion Dollar Coin? WTHeck! Is this an attempt to save Uncle Sam B id en's 2021 budget? 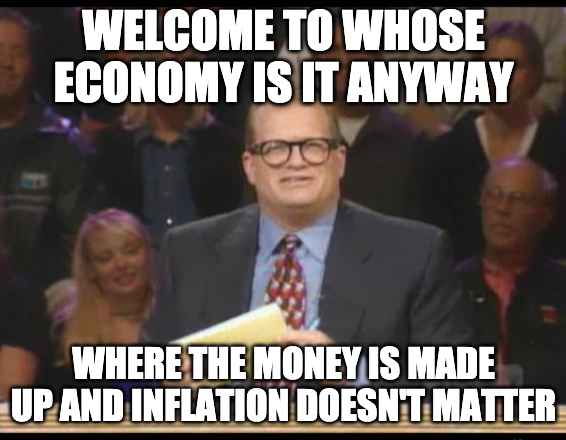 Re: A 1 Trillion Dollar Coin? WTHeck! Is this an attempt to save Uncle Sam B id en's 2021 budget?

CAUTION: for a couple of f-bombs

Bid en is calling "Uncle" again over THAT "T" coin!

D-Daily he should scream peace!

As part of a deal between House Speaker Kevin McCarthy and the fractious House Freedom Caucus, Republicans in Congress have pledged to return federal discretionary spending to 2022 levels. The omnibus bill set spending levels for the 2023 fiscal year, so promising to return to the 2022 spending level amounts to a promise to undo that omnibus bill and not replace it with more spending hikes.

As a practical matter, that would require cutting about $130 billion out of the federal budget next year. In a more normal place, this would be seen as what it is: a promise to hold government spending level. In Washington, D.C., this is viewed with shock & horror. Politico, in citing "congressional sources" describes the plan as "impossible," relying on "severe cuts," saying the futile exercise would "put Don Quixote to shame."

Yes, the Dark Ages of 2022, when the government spent a mere $1.7 trillion on discretionary programs. My goodness, how could we ever consider rolling things back that far? Of course, there are plenty of good reasons to be skeptical that McCarthy's promise will be fulfilled. For one, there's a Democratic majority in the Senate and Joe Biden still resides in the White House.

For another, even many Republicans don't seem very interested in sticking to the deal, with some already trying to weasel out of forcing the Pentagon to be subject to the same budget rules as everyone else. The crazy thing is: Even if Congress did manage to hold discretionary spending next year, overall spending would still increase because the $1.7 trillion discretionary budget is only a fraction of federal spending.

And if you think simply not increasing spending is "impossible," wait until you see what a new analysis found: to balance the budget within 10 years all spending would need to be cut by roughly 25 percent. If the Pentagon and entitlement programs aren't included in those cuts, the discretionary budget would have to be cut by a shocking 85 percent. Now that's something that might put the Man of La Mancha to shame.

Asking the federal government to operate with the same levels of funding as it had in 2022 shouldn't be seen as impossible or insane. It should be a starting point.

FULL STORY
"Everything Woke turns to