It would be nice to have our interests turned towards a "Space Race" , instead of a race to "Dooms Day", much more positive and it would drive the Dems nuts.

When NASA's Mars rover Perseverance, a robotic astrobiology lab packed inside a space capsule, hits the final stretch of its seven-month journey from Earth this week, it is set to emit a radio alert as it streaks into the thin Martian atmosphere.

By the time that signal reaches mission managers some 127 million miles (204 million km) away at the Jet Propulsion Laboratory (JPL) near Los Angeles, Perseverance will already have landed on the Red Planet - hopefully in one piece.

The six-wheeled rover is expected to take seven minutes to descend from the top of the Martian atmosphere to the planet's surface in less time than the 11-minute-plus radio transmission to Earth. Thus, Thursday's final, self-guided descent of the rover spacecraft is set to occur during a white-knuckled interval that JPL engineers affectionately refer to as the "seven minutes of terror."

Al Chen, head of the JPL descent and landing team, called it the most critical and most dangerous part of the $2.7 billion mission.

"Success is never assured," Chen told a recent news briefing. "And that's especially true when we're trying to land the biggest, heaviest and most complicated rover we've ever built to the most dangerous site we've ever attempted to land at."

Much is riding on the outcome. Building on discoveries of nearly 20 U.S. outings to Mars dating back to Mariner 4's 1965 flyby, Perseverance may set the stage for scientists to conclusively show whether life has existed beyond Earth, while paving the way for eventual human missions to the fourth planet from the sun. A safe landing, as always, comes first.

Success will hinge on a complex sequence of events unfolding without a hitch - from inflation of a giant, supersonic parachute to deployment of a jet-powered "sky crane" that will descend to a safe landing spot and hover above the surface while lowering the rover to the ground on a tether.

"Perseverance has to do this all on her own," Chen said. "We can't help it during this period."

FULL STORY
"Everything Woke turns to

Ultra Safe Nuclear Technologies, a Seattle-based company, suggested using nuclear thermal propulsion (NTP) engines to fly the astronauts from Earth to Mars. The proposal is said to potentially transport humans to Mars in three months' time. That is much faster than the current engine design that would take almost nine months for a crewed mission to reach the red planet. FULL STORY

As they experiment with certain propulsion systems, they also stumble along in the search for something to replace our current Fossil Fuel, power grid. And I'm quite sure it Won't be solar or wind. There is a link between the two.
KARMA RULES

Recently landed Mars rover Perseverance sent back its first audio recordings from the planet. Spoiler: There’s not much on the tapes. But it’s a good thing that Mars seems very chill, right? LINK
"Everything Woke turns to

A strange feature has been observed on the surface of Mars: a deep pit, showing as a black spot of darkness in images taken by NASA’s Mars Reconnaissance Orbiter. The mystery area is a pit with a sand floor and slopes down to the southeast. Scientists are now trying to figure out if the deep pit could be connected to a network of underground tunnels left behind by fast flowing channels of lava — much like the ones found in Hawaii’s Volcanoes National Park. FULL STORY
"Everything Woke turns to 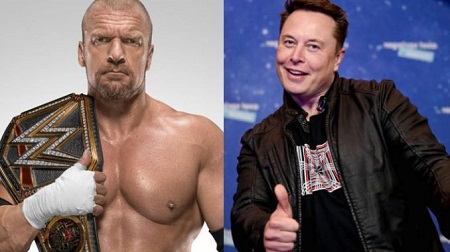 Unimpressed by Elon Musk’s off-the-charts personal wealth, speaking on The Good Time Show, a tech and culture podcast, semi-retired WWE superstar Triple H publicly challenged the scrawny billionaire to duke it out on the Red Planet.

“Let me address Elon Musk because I feel like there’s some disrespect going on here,” HHH said on the podcast, in a tone that may have been facetious. “Because I don’t know if he has a superiority complex because he’s a rocket scientist, a self-taught rocket scientist, right? Big deal. He’s a guy that sort of revolutionized the electric car all because he wanted to fly rockets to Mars. Big deal.”

“Elon Musk, if you’ve got the guts, if you have what it takes to do this,” the wrestler said, “then you and I will talk about what I really want to talk about, which is taking one of your rockets, launching it from Florida, going up into space, heading to Mars with a team from the Performance Center, where we then put on the largest spectacle the Universe has ever seen – WrestleMania Mars.”

It’s still unclear if Musk is willing to throw down the gauntlet and defend his honor on Martian soil. FULL STORY
"Everything Woke turns to

Few celestial objects have fascinated humankind throughout history more than the Red Planet. Here's what you need to know about Mars. FULL STORY
"Everything Woke turns to


Clouds mean "atmosphere" of somesort. Getting ready for us?

Noora Alsaeed has often thought about building a snowman on Mars. Let’s go over that again. A snowman on Mars? That desertlike, desolate planet over there? The one covered in sand? What an unusual daydream.

But Alsaeed knows a few things that the rest of us don’t. She is a planetary scientist at the University of Colorado at Boulder whose work relies on data from a NASA spacecraft that orbits Mars. She studies the red planet’s polar regions and the peculiar molecules suspended in the atmosphere above them. She knows that on Mars, it snows. FULL STORY
Top
Post Reply
56 posts