Protester Interrupts Elizabeth Warren: ‘Why Are You Siding with Terrorists?’

Protester Interrupts Elizabeth Warren: ‘Why Are You Siding with Terrorists?’


Protester Interrupts Elizabeth Warren: ‘Why Are You Siding with Terrorists?’

A protester interrupted Sen. Elizabeth Warren’s (D-MA) town hall in Dover, New Hampshire, on Friday and accused her of “siding with terrorists.”

An angry protester interrupted Warren on Friday, accusing her of siding with Iran over her position on President Trump’s elimination of Iranian terror chief Qasem Soleimani.

“This is a man who is deeply upset,” Warren said.

“He killed 600 Marines,” the protester said — a purported reference to Soleimani’s role in the death of hundreds of U.S. service members and injuries of thousands more. “We killed a terrorist. Trump is great. You’re a fraud. I helped rape victims, and you’re lying.”

“It’s good to see you,” the man replied, adding, “Hope you resign.”

Campaign staffers eventually removed the man from the room:

That guy was obviously deranged. Liz doesn't side with terrorists nor is she a liar. Instead of harrasing her he should be hugging her. Classy, humble, salt of the earth, that fits Warren to a T! Obviously, that goes for any & all the 2020 Dems.

If he was thinking clearly he'd see the cold hard matter of fact no greater purveyor of falsehood & fraud threatens the whole of humanity & the planet than our Crude & Rude, Pussy Grabbing, Blood Of Innocents On His Hands Monster In Chief.

Of course, that's NOT MHO, BUT hey what can I say? Along with hearing it from a friend, I do still catch some of the day in day out SOS Leftist schtick on NPR

Deporables BLAH BLAH Racists BLAH BLAH BLAH Trump BLAH BLAH
There are none so asleep & oblivious to the real world as those who are & would be Woken.

Democrat presidential candidate Sen. Elizabeth Warren’s (D-MA) son-in-law, with whom she is close, has troubling ties to the Iranian regime, according to a new book by Peter Schweizer.

The book, Profiles in Corruption, reveals progressive leaders’ little-known ties to corrupt businesses and governments and discusses the Massachusetts senator in a chapter.

The chapter details the business deals of Warren’s son-in-law, Sushil Tyagi, who is married to her daughter, Amelia. Tyagi was born in India but moved to the United States, where he met Amelia while they were both pursuing MBAs at Wharton Business School.

Warren and Tyagi are close. She attended his brother’s wedding in India, recounting it in her memoir. She and her husband Bruce Mann in December 2009 served as witnesses for a power of attorney corporate document he filed in India.

Since his marriage into the Warren family, Tyagi “has been involved in a series of curious—even troubling—business ventures around the world,” Schweizer writes.

Why do the Liberal Dems always side with the Most Corrupt and downright Terrorist Organizations?

That just doesn't seem to work for them. To work for Positive, and Constructive things for the people who put them in office, using all the good things We Do Have here, and that's a lot! Do you ever see them laugh.........when they are Not destroying something?

Why is that?
KARMA RULES
Top

The Anything For A Laugh Left

From their POV, they are working for positive & constructive change - And the best way clear to that is to destroy the negative & unconstructive existing order: To that end, Dems will side with whoever & whatever will help get them what they want -

The beauty part of destroying the world in order to save is, it needn't make a lick of sense; f*ck logic, consistency, rational thought. Emotion! Now that's the ticket. And what a ticket it'll be. There's no time to lose or for losers. WIN WITH WARREN 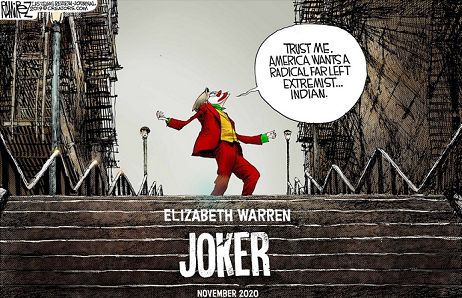 Want a better world? It's all for a good cause - PLUS? It's FUN: Rip it up, tear it down, leave the pieces on the ground, you won't help but get more than giggly. Put a smile on your face - Don't delay, join the Dem's Joker Agents Of Chaos & Ruin today. You'll be glad you did
There are none so asleep & oblivious to the real world as those who are & would be Woken.

"Inside every progressive is a totalitarian screaming to get out." - David Horowitz
Top
Post Reply
5 posts • Page 1 of 1